Certain films are remembered by their opening sequences. Three “classics” that come to mind are “Saving Private Ryan,” “The Good, the Bad, and the Ugly,” and of course “Citizen Kane.” Rebuilding Paradise, the 95-minute documentary produced and directed by Ron Howard (distributed by National Geographic Films) that chronicles the destruction of Paradise, a town in Butte County, California, may be that rare documentary whose audience will experience the same effect.

The film’s early sequence consists of recorded local radio and television reports — several hours before the deadly conflagration of the town began — warning of unusually dry weather conditions that made the environment even more at risk for a forest fire. Among these media reports are the list of preventative measures the area is taking. One of the announcements is that Pacific Gas and Electric (PG&E), the utility company that services the region, will be shutting down its power supply. However, the infamous company never does, which profoundly exacerbates the tragedy that is to follow. Next, we are presented with disparate video and audio recordings gathered from camcorders, smart phones, and dashcams as the air turns black with smoke and fire smolders and spreads. Residents hurriedly abandon their homes and get on the road in the hopes they will find a way to escape the blazes.

By 11:00 AM, Paradise soon transforms from day to pitch black night. We experience much of the disaster from the view of police officer Matt Gates, whose radio blurts out first responder reports as we ride with him in the darkness, illuminated by his headlights and the trees afire on either side of the road as he gingerly peers out his cruiser to see if anyone needs his assistance. While we don’t actually view human casualties amid the apocalyptic scene, the foreboding announcement that “structural defense is not a priority” provides one with a shudder that human lives are at risk. When the conflagration subsides, and the initial shock subsides a bit, the grim statistics come in. We learn that over 60 souls have perished. 19,000 buildings have been destroyed, which accounts for 95% of the town. Rebuilding Paradise (as the name implies) follows the efforts to rebuild Paradise. Just as there is no parkland left in the area, saving Paradise is no walk in the park. The aftermath reveals a swath of burned land and homes. Homeless residents are bivouacked in cot-filled auditoriums.

Experts determine that climate change exacerbated the fire as did the century old PG&E equipment, which was never shut down. Cut to three months later. Town meetings are held — members still bearing expressions of shock and anger. FEMA sets up shop as does a legal team that’s determined to get judicial satisfaction. A “Paradise Strong” campaign begins. Anger with the utility company is evident in small details. Along a road, there’s a hand painted sign, “PGE sucks.”

Yet the town presses on. The roving camera shows school superintendent Michelle John attempting to revivify the school system. School councilor Carly Ingersoll discusses her added assignment, which is to help the students deal with attending school while the town is rebuilt. In her office is an apt motivational sticker: “Kindness is the new cool.” Officer Matt Gates, who lost his home, serves as an informal guide to point out the structural destruction. A recent high school graduate examines a patch of grass with some garden furniture strewn about. A forest stream meanders nearby. “I would just sit out here. I love Paradise. Paradise is my true home,” says the young man.

A representative from PG&E addresses a town hall meeting to offer his condolences. But his attempt at sincerity doesn’t fool anyone — least of all himself. More to the point is a small gathering of Paradise folks assembled in a living room, where one of them provides an impromptu assessment. “You burned our town to a crisp. You’ve raised our rates. We’ve lost everything. And we’re paying you to fuck up. How is that right?” he complains.

Will the $13.5 billion payout by PG&E turn things around? Not so fast. Brandon Burke, a pyrogeographer, is in the midst of performing intentional burning to reduce the risk of another firestorm as he admits that residents still have residual trauma and can’t yet appreciate the benign use of fire.

Steven Spielberg managed to give ET a ticket back to his home beyond our solar system. But that movie was fiction. To provide the opportunity for Paradise to rebuild and to reduce the risk of it disappearing again will be a lot harder.

As usual, the reliable and self-effacing Ron Howard (“Frost/Nixon”) and his production team stay out of the way as the story is told. Rebuilding Paradise is no innovative documentary as you would expect from Errol Morris or a meta-analysis of film making, showing a camera crew going about its job. You can feel the respect the camera has for its subject matter. It doesn’t reveal; rather, it discovers. And so do we. 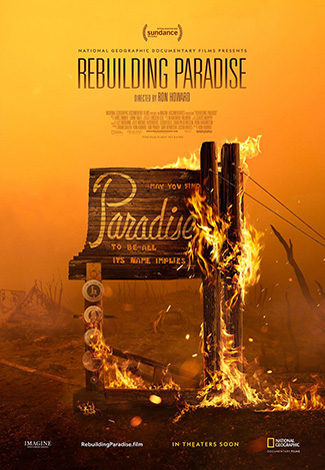