Jenny Slate’s latest dram-rom-com vehicle, The Sunlit Night, seems like a bit of a rehash of her previous film, “Obvious Child.” There are certainly some broad similarities: Her character Frances has just gotten out of a relationship and she’s in a slump both romantically and professionally. So it is no wonder Slate brings the same level of energy to her role. However, as much as Slate is a vibrant and charismatic force, The Sunlit Night is just too poorly conceived to be taken seriously.

First, we have the rather generic plot which involves Frances making a trip to Norway (hence the title, since Norway is still so bright at night) in order to apprentice for Nils (Fridtjov Såheim, “The Wave”), an artist who is trying to paint a yellow house. It is generic in the sense that Frances begins her journey being lost artistically, and finds her artistic confidence after her experience, just as you expect her to. Nils and Frances have different artistic ideologies, where Nils is all about structure and order, and Frances prefers to color outside the lines. Somehow, the two strike up a friendship, but there isn’t much color in their interactions.

Then we have secondary characters like Haldo (Zach Galifianakis, “Keeping Up with the Joneses”), an intense guy very, very much into the Viking life. Though there are plenty of Viking moments played for laughs, I didn’t find his scenes very funny, and his whole story seemed hammed in to show Frances what following your passion looks like, since she’s lost a bit of that passion in her own art. Gillian Anderson (“Johnny English Reborn”) as Olyana, a visiting Russian, is barely in this, and her character feels so unnecessary that anyone else could have taken the role and it wouldn’t have made a difference.

Frances finds herself drawn to Yasha (Alex Sharpe, “The Hustle”), who is reeling from the death of his father. His father had been his whole life, with the two moving to America from Russia to seek a better life, and now that he’s gone, Yasha doesn’t know what to do with himself anymore (or how to deal with his estranged mother Olyana). But there is nothing dynamic about Yasha and Frances’ relationship. We know that they will have some dalliance because the film is headed in that direction, and there is nothing engaging and compelling about it — kind of like watching paint dry. There is an interesting possible discussion here — where Yasha’s grief speaks to Frances because she is grieving about her art in her own way — but the way it plays out just isn’t as interesting as it could have been.

Aside from the supporting characters in Norway not being particularly captivating, ironically, the film’s movement away from the New York space is actually to its detriment. Frances’ family — engaged sister and divorcing parents (David Paymer, “The Five-Year Engagement” and Jessica Hecht, “Write When You Get Work”) — and life in New York felt so much more engaging, and when we move back to this space at the end, you can see that these characters were more properly conceived by screenwriter Rebecca Dinerstein, as opposed to their Norwegian counterparts.

The setting is beautiful though, and we can understand Frances becoming inspired when she is surrounded by so much beauty of the Scandinavian landscape. Solitude is also a contributing factor — New York is so clustered and crowded that Frances didn’t have the space to work, so the contrast is notable. But it’s saying something if the setting has more to offer than the plot. And that is certainly not the aim of The Sunlit Night. 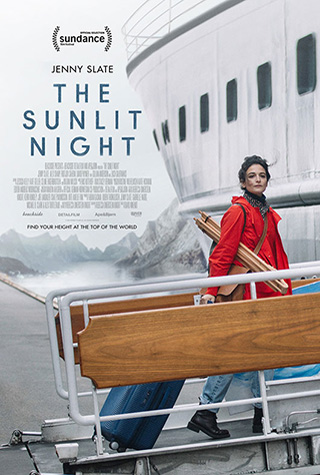