In the second remake to release this week, director Craig Gillespie (“Mr. Woodcock“) brings us Fright Night, which, penned by Marti Noxon, is loosely based on Tom Holland’s 1985 film of the same name. Fortunately, unlike the retelling of “Conan the Barbarian,” it’s an entertaining update of a cult-classic.

On the outskirts of Las Vegas, a city that basks in the darkness, Charley Brewster (Anton Yelchin) and his single mother, Jane (Toni Collette), live in a suburban housing development. It’s not the nicest place in the world and is surrounded by several miles of desert, but everyone knows each-other. That is, except for Jerry (Colin Farrell), their next door neighbor, who keeps an unsightly dumpster on his front-lawn and has his windows blacked out. But, Charley, who has just entered the ‘cool’ circle at the local high school and is now dating the local blonde bombshell, Amy (Imogen Poots), is approached by Ed (Christopher Mintz-Plasse), his former friend and a self-proclaimed geek that threatens to air his ex-BFF’s dirty laundry (complete with embarrassing video), if he doesn’t help investigate the local disappearances and stories of a man trying to bite young women in the dead of night. Before long, Charley, who doubts Ed’s sanity, becomes embroiled in Jerry’s life, whom he believes is a vampire looking to strike his family. And to help end his neighbor’s killing streak, he enlists a television personality named Peter Vincent (David Tennant), who claims to be an expert in the occult.

Farrell plays Jerry with the charm one would expect from a serial killer or sexual predator. There’s certain persuasiveness about the way he talks. In addition to his soft-spoken, monotonous delivery, which creates the illusion that he’s harmless, Jerry utilizes his broad physique along with a cover-story, claiming that he’s like most of the residents of the development — just another night-worker. He rarely uses his vampirism to overpower his hunt. Instead, he connects to them on a personal level, by inviting them into his house for a friendly drink (like he does to Doris — played by Emily Montague — one of his first victims) or by helping them do the regular, around the house chores (how he begins to lure Jane). But once that precious blood is in hands, or if it becomes too much of a hassle for a bait-and-switch, he shows his talent at brutality. Farrell, who is a top-notch actor in roles like this, is unpredictability, charisma, and pure evil rolled up into one character. But, towards the third act, Noxon momentarily has Jerry abandon his cool cucumber shtick and spontaneously become the Incredible Hulk (albeit a bit more fair skinned and a tad shorter).

Tennant’s the other standout. Fans of the television series, “Doctor Who,” will instantly recognize the actor, while others may remember his turn as Bartemius ‘Barty’ Crouch Junior in “Harry Potter and the Goblet of Fire.” Here, he plays Peter with a drunkenness that fits the character. Rarely seen without a bottle of liquor, Vincent is usually the film’s comedic relief, despite being an empty shell of a man. Dressed in tight leather, he lives in a penthouse that’s decorated in gaudy vampire artifacts. As a person, he’s detestable, constantly insulting (and later flirting) with the models that work with him. However, as an expert in vampirism, he’s the best (and only) around.

Setting does the film a huge favor. Being in the middle of a barren desert, it trickles isolation and eeriness. Plus Sin City’s blaring lights (which can be seen in the distance) juxtapose the town’s darkness and resident undead. As the title implies, most of the film is shot at night or in dimly lit interiors. This makes it an opportune hunting ground for any hungry vampire. Eventually, Fright Night transcends into the strip, where it becomes more action-oriented. Much like Jerry’s sudden metamorphosis, this abrupt shift in tone also isn’t appreciated.

The script is a sharp balance of horror and comedy and for the most part, the screenwriter has fun with the idea by parodying the clichés that accompany vampires, such as the “rules” in slaying them, which Jerry teases Charles with. And despite the film’s fantastical elements, the interplay between the characters is believable enough to account for Yelchin’s meandering performance in the lead. At the same time, the jabs at “Twilight” are too obvious to be funny and Mintz-Plasse’s character could’ve easily been cut, even if he was a central figure in Holland’s production.

From the cinematography, make-up, and set-design, Fright Night feels like a classic vampire flick. It doesn’t revolve around moody teenagers nor do the creatures sparkle when exposed to sunlight (rather, they disintegrate into a pile of dust). But from the soundtrack, which features a folk cover of Jay-Z’s classic record, “99 Problems,” and pop-culture references, it has a distinct modern twist. For the most part, this works. And when the film falters, it’s easy to forgive it. Finally, a vampire movie that doesn’t suck (well, technically it . . . does . . . forget it). 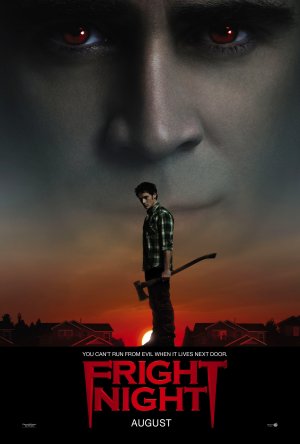