Sports movies are very predictable. Both cautionary tales and underdog stories end in almost surefire victory. Given their foolproof game plans, the only way to decide whether one of these movies is good or not is by how pumped-up you get watching it. Without any notable competition, Antoine Fuqua’s summer boxing drama “Southpaw” has become this year’s champ, despite a hit-or-miss script; however, Ryan Coogler’s Creed, a successor to Sylvester Stallone’s classic “Rocky” series, has since stepped in to take the belt.

“Fruitvale Station,” Coogler’s debut project with lead Michael B. Jordan, was incredibly claustrophobic. Being based on real events it toyed with a sense of inevitability. The plot worked like an hourglass, slowly burying its characters under the weight of their own obliviousness. Creed has a lot more narrative freedom, despite its first scene being set in a Los Angeles youth facility, where a young Adonis Johnson, the extramarital son of former heavyweight champion Apollo Creed, is swept up by the boxer’s grieving widow. Conceptually on the other hand, as the story skips a decade to the boy-now-man (played by Jordan, “Fantastic Four”) quitting his job to become a professional fighter, there seems to only be one possible outcome.

Our chances of seeing Adonis in the big leagues spikes drastically further when he tracks down retired legend Rocky Balboa who, after his 2006 self-titled comeback, is back to being the owner of some decrepit Philadelphia restaurant. Still played by Stallone, Rocky is at first reluctant to help the young Creed but, as you might expect, caves to become his mentor and trainer. In the midst of their practice a young singer named Bianca (Tessa Thompson, “Selma”) is also introduced. Her character, the love interest, is a Hollywood obligation that the aforementioned Fuqua, in killing his eponymous character’s wife, protested. Nevertheless, Jordan, Thompson, and Stallone have decent chemistry together.

Montages of people working out will always make you want to get up and start running too, especially if they’re set to a soundtrack comprised exclusively of Meek Mill and diet FKA twigs songs. They’re almost a prerequisite of the genre and, unlike bland romances, are still kind of appreciated. Making the rival boxer an undivided asshole also gives the audience some primal satisfaction. Creed experiments with these archetypes by granting Adonis class privilege over his competitor, the prison-bound “Pretty” Ricky Conlan (Tony Bellew). That dynamic, much like his one-dimensional romance with Bianca, could’ve used a shot of steroids though.

Despite their shoddy development, these characters are still likable. Everyone gives a good-to-great performance. Nevertheless, Creed remains about inheritance. Since its first installment, the “Rocky” series has been about creating an expansive mythology. The script in this latest edition, penned by the director alongside Aaron Covington, is full of references and inside jokes. While Adonis is a passable protagonist, his story is still overshadowed by the tattered Balboa, who must learn to transcend his legacy past the statues and tombstones. 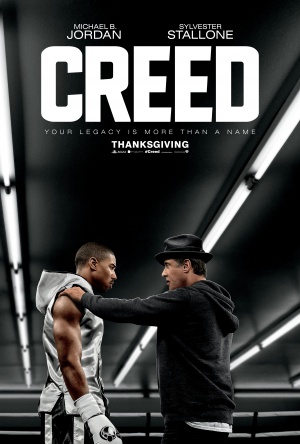