Several years ago, I managed to catch an episode or two of a UK show titled “Mr. Bean” during the wee hours of the morning. It was certainly no match for shows like “The Benny Hill Show” or “Coupling,” but I did find it mildly amusing (this may have been caused by the hour of the airing, my repeated alcohol binges or a combination of the two). Fast forward a few years, and I get word that the Beanster has a motion picture out. So I figured why not, it can’t be that bad, can it? After my viewing of Mr. Bean’s Holiday my one word answer is yes. Yes, it can be that bad. See below for my long winded analysis.

Once again, there is Rowan Atkinson reprising the role of Bean, a complete idiot of a man who chooses to not speak but rather to make noises, mumble and gesture fanatically to communicate. And just like the episodes I saw, he always finds himself in some very peculiar situations. In Mr. Bean’s Holiday, Bean wins a trip to beach vacation in the south of France. Along the way he films a video diary that captures him befriending a Spanish boy and wreaking havoc all throughout France while he tries to figure out how the hell to get to his destination. During his travels he fouls a fine French restaurant, ruins the filming of movie, begs for money in strange ways and crashes a movie premier, just to highlight a few. Of course all his problems are compounded by — you guessed it — the language barrier! How unexpected!

Here is the main problem I had with the movie. It just made zero sense. Each and every scene was put into place just to spotlight how abso-fucking-lutely stupid this guy is. Take the aforementioned restaurant scene. Of course he orders the wrong food because he doesn’t talk and doesn’t understand a lick of French. But upon seeing it is live oysters and crawfish, something he clearly abhors, why bother going through the routine of fake eating them and then dumping the creatures into a ladies purse? I don’t get it. I realize the guy is retarded on some level, but at some point you just have to come to the conclusion that this is really, really pathetic — especially when these type of scenes repeat themselves ad nauseam.

But alas, all is not lost my child. Willem Dafoe has a small role as Carson Clay, a self-centered Hollywood douchebag. Watching him love himself at the viewing of his self righteous movie “Playback Time” is classic, especially since everyone else in the audience is half asleep. Even more impressive is the fact that Rowan Atkinson can still morph his body and face against the laws of physics. He’s in his fifties and still kicking. Hell, I think Jerry Lewis gave that shit up when he hit his forties. Whatever the case, it’s good he can still do it, but I think it would be better if he chose to not do it anymore.

My final thought on Mr. Bean’s Holiday is this: Europeans will love it. After all they love this kind of comedy (hence the reason Jerry Lewis found a home there). It just doesn’t translate well here in the States. I’m confident if you wait long enough a better Euro import will make it’s way here. Until then, rent “Borat” again. 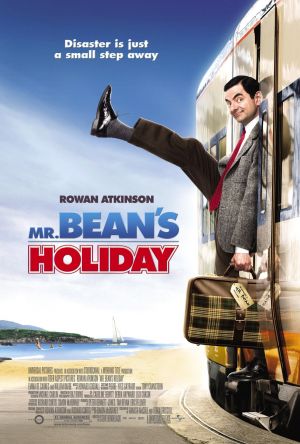