Sequels, warranted or not, are a mostly foregone conclusion in today’s cinematic climate. They’re so prevalent, I imagine a checklist of sorts exists that lays out the criteria for a follow-up. It’d be rather simple-minded too, like:

The more points met, the greater the likelihood of sequalization. In the case of 2013’s “The ABCs of Death” at least one and one half of the criterion are met, therefore ABCs of Death 2 exists (there simply is no other explanation). But unlike its predecessor which boasted it had several accomplished, recognizable directors aboard (Ti West, Simon Barrett, Adam Wingard), this sequel appears to have none that are household names. Neither does it have that fresh blood smell a horror anthology that seeks frugal inventiveness is expected to have. But where is fails on the horror side of the house it unintentionally picks up on the humor side (whether that is a fair trade-off is the topic for another discussion).

The standouts, of which there are few, are “Z is for Zygote” by director Chris Nash, in which a pregnant woman carries her baby well past due date resulting in consequences that are gross on several levels. Director Robert Morgan delivers a wildly bizarre claymation short titled “D is for Deloused” that sees bugs getting the last laugh against their murderous squashers, I think. “A is for Amateur” from E.L. Katz, gives viewers of action thrillers a true look at how an ambush from an airduct would really go down. Hint, it’s not nearly as easy as “Die Hard” makes it out to be. And lastly, “R is for Roulette” from Marven Kren ramps up the tension as three Germans seated around a table play Russian Roulette for reasons other than a dare.

Of the remaining 22 shorts in ABCs of Death 2, they hover between really, really poorly done (Soichi Umezawa’s “Y is for Youth” and Steven Kostanski’s “W is for Wish” are examples) to having a mildly interesting premise (Juan Martinez Moreno’s “S is for Split” and Hajime Ohata’s “O is for Ochlocracy” are examples) to just not giving a damn (“I is for Invincible” from Erik Matti and “E is for Equilibrium” from Alejandro Brugués are examples). It’s all hit and miss (mostly miss, obviously) and for the most part not worth having to sift through 125 minutes of entrails to dig up something of worth.

But that’s how anthologies go, especially sequel ones crafted with suspect skill under heavy constraints, I suppose. So in standing with the motif ABCs of Death 2 adhered to, I say “S is for Stay” “A is for Away,” “B is for Better” “H is for Horror” “F is for Found” “E is for Elsewhere.” 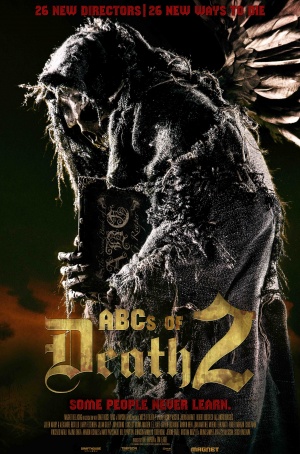