Latest on the slate from Blumhouse Productions — known for their mostly neutered horror flicks (“Unfriended: Dark Web,” “Truth or Dare,” “Happy Death Day,” to name a few of the more recent ones) — is Fantasy Island, a retooling of a campy, Aaron Spelling produced television show. And much like that late 70s to early 80s piece of fluff, the movie adaptation leaves much to be desired. At least the television series had a one hour time constraint and strict broadcast rules as its excuse.

The heart of the concept is basically a tweaking of the three wishes and the genie in the lamp premise, replacing it with a fantasy come true and an island that brings said fantasies to life. Both rely on greedy, narcissistic (and in some cases unsuspecting) people to take advantage of.

The victims here, or should I say winners of some sort of contest or something, arrive by plane and to a lovely assistant (Parisa Fitz-Henley, “Lola Versus”) exclaiming “The plane, the plane!,” only without the verve of Hervé Villechaize. Disembarking is Melanie (Lucy Hale, “Scream 4”), Elena (Maggie Q, “Allegiant”), Patrick (Austin Stowell, “Battle of the Sexes”) and brothers Bradley and Brax (Ryan Hansen, “Literally, Right Before Aaron” and Jimmy O. Yang, “Crazy Rich Asians”). They are soon told by island caretaker Mr. Roarke (Michael Peña, “Ant-Man and the Wasp”) that each will be gifted a single fantasy come true that, ominously stated, “must be lived out to its natural conclusion.” Easy enough. Melanie wants revenge on Sonja (Portia Doubleday, “Carrie”) her high school tormentor; Elena wants a do-over with the man she loves; Patrick wants to be a hero soldier like the father he barely knew; and Bradley and Brax want to party and enjoy anonymous hook-ups.

Some of these wants lend themselves nicely to a horror slant, after all everyone has thought of a terrible way or two to administer some pain to an asshole who has wronged them. So when Melanie gets her turn, and co-writer and director Jeff Wadlow (“Kick-Ass 2”) starts it off with a “Hostel: Part II” vibe, I can’t deny a smile did appear on my face. Brief it was though, as the PG-13 rating kicked in full gear immediately after the set-up. Bradley and Brax’s go skips entirely on the hedonistic fun promised and ends up with some quasi-“Bedazzled” scenario playing out. As for Elena and Patrick, their stories don’t amount to much more than sap, although fans of Maggie Q get their fair share of her showing off her still impressively toned body.

Although nary a scare anywhere, fellow co-scribes, Jillian Jacobs and Christopher Roach, continue to throw jump scares at the audience as they work in ways to intermingle everyone’s fantasies into one long adventure to get off the island, even stuffing in a thoroughly disheveled Michael Rooker (“Brightburn”) who may or may not be a tool of the island. Most of what they concoct misses, however, Jacobs, Roach and Wadlow do figure a way to get a relatively good twist in, even though the reasoning behind it is beyond dumb. Dumber still for me, is how when things seemingly come to their end, the undead come to play a part in the proceedings. I may have missed it, but when have the walking dead been considered a natural conclusion to anything not in a George A. Romero film?

As for the actors tasked with selling it, they’re unenviably stuck between a rock and hard place. Most of them — Hale, Maggie Q, Stowell, Fitz-Henley, Doubleday — take their roles to a serious level, even though the material deserves nothing more than what Peña (sleepwalking it), Hansen (over-the-top silly) and Rooker (outright crazy) deliver. This lack of cohesiveness, along with the sub-par plot and myriad missed opportunities, makes Fantasy Island a fantasy for no movie goer, who should instead give the marginally more entertaining source TV show a viewing. 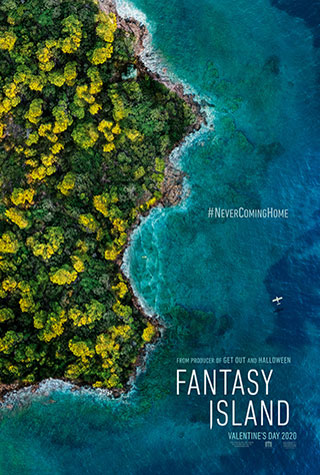