Winner of the World Cinema Grand Jury Prize and awards for cinematography and originality at this year’s Sundance Film Festival, Ljubomir Stefanov and Tamara Kotevska’s unforgettable documentary Honeyland looks into the ancient tradition of beekeeping, a tradition that has been attuned to the rhythms of nature for centuries. Set among the isolated villages and rocky hills of North Macedonia and shot over a period of three years by cinematographers, Fejmi Daut and Samir Ljuma, Stefanov and Kotevska compiled more than 400 hours of footage and the opening scene tells us the kind of inhospitable environment in which the film takes place.

We see a slender, middle-aged woman walking calmly on a narrow ledge high in the mountains until she finds and removes a rock that hides a group of honeycombs. Hatidze Muratova, one of the few remaining female beekeepers left in Europe, is a woman dedicated to maintaining a balance between nature and humans. To accomplish this, Hatidze’s rule is that you take half the honey and leave the other half to the bees. If you take too much, the bees will die. Singing traditional folk songs to the wild bees, without fear of being stung she captures some of the wild bees to bring home to her hives. Unmarried, Hatidze lives with her elderly mother Nazife and her devoted dog Jackie. Partially blind, Nazife is in her eighties and has been confined to bed for four years but provides her daughter with her only companionship.

Their house is 12 miles from the nearest city, Skopje, the capital of Macedonia, best known to the world as the site of the 1963 6.1 earthquake that killed over one thousand people and destroyed eighty percent of the city. It is to Skopje that Hatidze travels annually to sell bottles of her honey which always draws praise from the merchants for its good quality and provides a good return. Aside from her visits to Skopje, Hatidze’s only contact with the outside world is a small transistor radio that has difficulty picking up any station without the crude antenna she has built for it. Her life is suddenly jolted, however, when a new family moves next door, bringing seven very lively children, a trailer, chickens and a herd of cows, the kind of neighbors you dream about.

Hatidze welcomes the Sams family, plays with the children, and teaches the father, Ljutvie, the methods of wild beekeeping but things do not go well. Though the Sams are good people trying to provide for their family, Ljutvie sees beekeeping primarily as a way to make money and has little regard for the environment. His actions destroy some of Hatidze’s bees and even many of their own young calves are found dead due to neglect. In a rare moment of humor, Hatidze’s quiet mother angrily asserts, “May God burn their livers.” Unwilling to follow Hatidze’s rule of “take half, leave half,” Ljutvie enters into a contract with a local dealer to deliver a huge amount of honey, making the Sams a threat not only to the bee population but to Hatidze’s way of life.

Honeyland is about more than beekeeping or even climate change. It is a story of connection and belonging, about our relationship with the planet, a film that asks us what kind of world we want to live in. Author Charles Eisenstein said, “Respect for nature is inseparable from respect for all beings, including the human. It is impossible to cultivate one without the other . . . What we do to the other, we do to ourselves.” We see the world through Hatidze’s eyes and understand that, in her experience of life she is not separate from nature but stands in service to it. 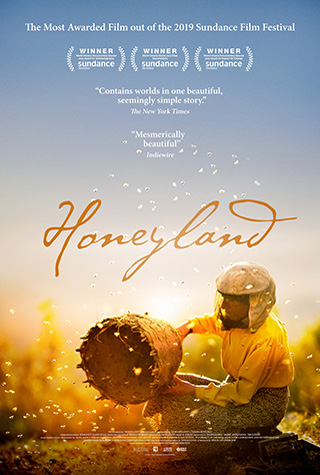