Many of William Shakespeare’s heroines are proud and witty women who are reluctant to be wooed; for example, Rosaline of Love’s Labor’s Lost, and Rosalind of As You Like It. One of the most high-spirited characters in Shakespeare is Beatrice, the niece of Leonato in Much Ado About Nothing, a sharp-tongued woman who more than holds her own in pointed exchanges with Benedick, a pompous soldier and self-proclaimed lifelong bachelor. In the latest screen adaptation of the play by director Joss Whedon (“The Avengers”), the milieu is shifted from Messina in Sicily to Whedon’s home in Southern California and is performed by an ensemble cast, assembled mostly from the TV series “Buffy the Vampire Slayer” (which Whedon helped mastermind). The film is very entertaining as Shakespeare comedies always are, but Whedon’s version of one of Shakespeare’s most vibrantly alive works feels strained and oddly lifeless.

Set in the present day and shot in black and white in only twelve days, the script maintains Shakespeare’s language but is spoken by modern-day Americans in suits, a scenario in which the words “my lord” and “my liege” seem slightly out of sync. Two courtships take place in the story: Claudio and Hero and Benedick and Beatrice as Shakespeare shifts back and forth between the stories, interweaving them into a unified whole. The main story is centered on false accusations of infidelity, a recurring theme in Shakespeare’s plays, e.g., Proteus’ treatment of Julia in Two Gentlemen of Verona, Angelo’s of Mariana in Measure for Measure, and Bertram’s of Helena in All’s Well That Ends Well to cite a few, allowing speculation of a tie-in to Edward de Vere’s cruel treatment of his wife Anne Cecil, accusing her of giving birth to a child not his own while he was in Italy.

Though the main source for the play is considered to be the 16th century novel Orlando Furioso, the war of the sexes theme that depicts two people (Beatrice and Benedick) claiming to despise each other and then tricked into falling in love, has no known source other than Shakespeare. As Much Ado About Nothing opens, Don Pedro (Reed Diamond, “Moneyball”) arrives with his officers Benedick (Alexis Denisof, “Guardians of the Galaxy”) and Claudio (Fran Kranz, “Mojave”), after having defeated his half-brother, Don John (Sean Maher, “Best Friends Forever”) in battle (perhaps in Gardena). The host Leonato is there to greet the arriving party together with his daughter Hero (Jillian Morgese) and niece Beatrice (Amy Acker, “The Cabin in the Woods”). As Claudio falls in love with the radiant Hero, everyone eagerly prepares for the wedding, with Hero, as was customary for that day, accorded no say whatsoever in the matter.

Benedick and Beatrice pretend to dislike each other and engage in verbal fisticuffs, both asserting vigorously that marriage is an abomination. Beatrice proclaims that “I had rather hear my dog bark at a crow than a man swear he loves me,” and Benedick echoes “Because I will not do them [women] the wrong to mistrust any, I will do myself the right to trust none . . . I will live a bachelor.” In spite of his outward disdain, however, Benedick succumbs to his friends’ trickery and is convinced that she is madly in love with him, to which Beatrice is moved to promise, “Contempt, farewell! and maiden pride, adieu! No glory lives behind the back of such.”

Jealous and vengeful, Don John sets out to destroy the marriage between Claudio and Hero by making false accusations of infidelity, an accusation that the trusting Claudio readily accepts on the slimmest evidence to protect his “honor,” a word repeated about twenty times throughout the play. The unwarranted accusation ends the wedding ceremony, sending Hero into hiding, pretending to be dead while Claudio grieves as Constable Dogberry (Nathan Fillion, “Super”) provides comic relief with his bumbling “investigation.” Though Shakespeare eventually acknowledges that Hero was blameless, Claudio easily slips off the hook without having to apologize or ask for forgiveness.

While the actors do a creditable job, they lack the exuberant power we associate with a performance of Shakespeare, a vitality that is fully realized in the 1993 Kenneth Branagh version of the play. In addition, Whedon’s addition to the text of farcical scenes of Beatrice and Benedick go beyond silliness and fall as flat as the prat-falling characters trying to overhear conversations. In this day of mindless blockbusters, credit must be given to Joss Whedon for at least attempting a mainstream film that has intellectual and literary merit. Unfortunately, for me, the intent with Much Ado About Nothing was not matched by the execution. 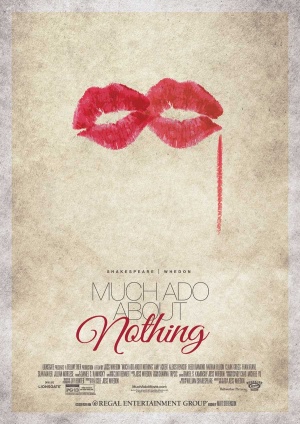