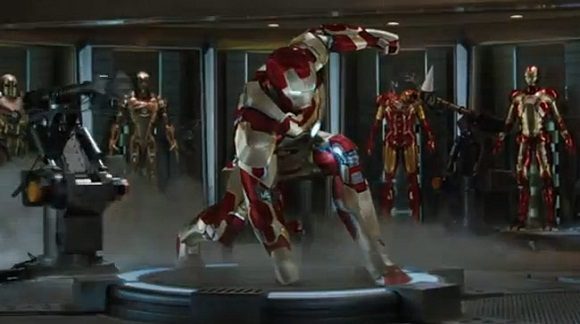 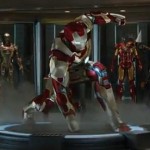 Tony Stark (Robert Downey Jr.) can’t sleep in Shane Black’s Iron Man 3 and that should tell you plenty about where we’re headed as Marvel rounds the home plate in its triumphant wrap-up to Phase 1 of its universe. The self-described “genius billionaire playboy philanthropist” is beset by anxiety attacks and bad dreams, attempting to acclimate himself to a world where Norse gods clash with alien armies set upon New York. As the first direct follow-up to Joss Whedon’s smash hit “The Avengers,” Black (along with co-writer Drew Pearce) elects to strip Stark down, emotionally and literally, leaving a man bereft of the suit that lends him power and authority. Before you roll your eyes, rest assured that the approach is miles away from Nolan’s deconstruction of the Caped Crusader — this is still Iron Man, and Jon Favreau’s initial mix of humor, light drama, and thrilling visuals (which unraveled a bit with the massive info dumps/multiple storylines of the second film, “Iron Man 2”) is adhered to and even elevated.

Running afoul of the heavily televised Bin Laden-type The Mandarin (Sir Ben Kingsley), Stark sees his homestead demolished in a viciously unexpected attack, and must go on the run to track the man down and solve a mystery of bombings that appear not to involve any conventional weaponry. Do all roads lead to Aldrich Killian (Guy Pearce), a man scorned by Tony who arrives on the scene transformed and with a grand plan in mind? Perhaps, though spoiling that would nullify one of the more curious surprises Iron Man 3 has to offer.

If you plop yourself down in the cushiony theater seats every year for the action element, Black makes the transition from the underrated neo-noir “Kiss Kiss Bang Bang” smoothly and deserves a bit of aplomb for the coherent, clean staging here. The finale in particular is thrilling, especially with the amount of action served up concurrently. That said, the most laudable thing Black brings to the series is genuine tension, a sense of the unknown tied to Tony Stark’s survival. Iron Man is tested but the man inside the suit is well trounced, and by keeping Stark away from his saving grace, Black shapes the most compelling entry in the trilogy. 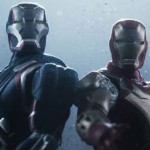 A little help from a friend.

That’s not to say Iron Man 3 is a full-bodied triumph, but the viewing experience is exciting if rarely thought-provoking. It doesn’t pander to the lowest common denominator and Downey is in his element, rattling off solid one-liners and yet finding the core (no pun intended) of Stark, showing a man challenged and changed. The rest acquits admirably — the verbal sparring between Pepper (Gwyneth Paltrow) and Tony remains the beating heart of the three films, and Don Cheadle’s ramped up role highlights the actor in action. Despite the aggressive marketing, Kingsley is granted some range in his portrayal of the gravelly-voiced terrorist and Pearce continues a run of oily men with questionable intentions. If anything, he is underserved by the role but that’s hardly noticeable when he and Iron Man share the screen.

All in all, Iron Man 3 is a fitting sequel and absolutely recommended as a summer distraction — at least until the noticeably moodier “Man of Steel” flies into town. 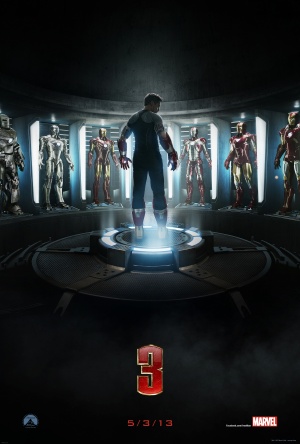