In the late 1990’s, Sam Childers, a criminal and a member of a notorious Pennsylvania motorcycle gang, decided to change his ways and turned to God for guidance. From that point onwards he devoted his life to helping Sudanese orphans who were suffering at the hands of the LRA (Lord’s Resistance Army). The LRA (led by Joseph Kony) terrorized parts of Uganda and Sudan, kidnapping up to 50,000 children, using the girls as sex slaves and forcing the boys to become soldiers. To this date, Childers is still out there continuing his work and Marc Foster’s Machine Gun Preacher attempts to relay the most poignant moments from his jam-packed life.

Gerard Butler bravely took on the role of both sinner and saint with Sam Childers, but was only really convincing as the latter. In the beginning, he embodied all the characteristics of a drug addicted, angry biker but it came across as forced and disingenuous. I really don’t think some of his lines helped matters as when Sam said things like, “I’m going to put your head through that wall” in a moment of rage, it just felt corny and unnatural. Thankfully, this part didn’t last for long and he eventually dropped the hard-man act. Once Sam turned to God, Butler delivered a truthful performance which actually broke my heart sometimes. Don’t get me wrong, he still saw out the duration of the film displaying varying degrees of hostile emotion, but he was much more believable once he had a genuine motivation behind his work, i.e., helping the Sudanese orphans.

A lot of the running time, however, was dedicated to building up Sam’s internal rage as he got sucked deeper into the Sudanese civil war and further away from his family. In a crescendo scene, it exploded out of him as he emerged from the side of the road as if he were John Rambo, branding a machine gun and letting rip. I felt as if I were watching a similar story to Michael Corleone in “The Godfather;” like Michael, Sam started out with the best intentions but the more he tried to do the right thing, the more he appeared to be crossing over to the dark side. Unfortunately, after putting all that work into the grand demise of Sam Childers, the film then did an abrupt U-turn with one single scene and his character was instantly reformed.

Actually much of the screenplay for Machine Gun Preacher, written by Jason Keller, really did feel like a bit of a rushed job in places (previous sentence just one of many). This is, no doubt, a testament to how many changes Sam Childers underwent in his life. There’s so much to fit in, I’m sure squeezing it all into a two hour frame was a thankless task. And with Sam still out there today continuing his work, his story is essentially not over yet (this also worked against the film as it felt like it ended simply because it reached its requisite time allotment).

Machine Gun Preacher was, however, very successful at driving home the point of how hard the people of Sudan have it in comparison to how easy we have it in the Western world. There was a scene where Sam phoned Lynn and she answers the phone in a supermarket surrounded by an abundance of goods — a stark contrast to conditions in Sudan. Also, a scene that depicted Sam’s internal struggle and really moved me was when his daughter asked him if she could get a limo to take her and her friends to a school dance. It worked so well because you could really see both points of view. Oblivious to others problems — especially those on the other side of the world — a limo drive to a prom is a girl’s number one priority (next to her dress choice) and having seen things through Sam’s eyes you could imagine the disgust he would have felt about someone thinking their biggest problem is whether or not they can be chauffeured to a dance when he can’t even get enough money together for an extra van to save orphans with.

And while it seems on the surface I’ve been critical of Machine Gun Preacher, it’s for good reason. Its got potential that just wasn’t quite realized — like the smart kid in class that a teacher is harder on because the kid coasts and doesn’t apply himself. Had it been a different movie with a different set of expectations, I could have possibly let these flaws slide. Nonetheless, Machine Gun Preacher, with its emotionally charged message, stands head and shoulders above a lot of other films out there. 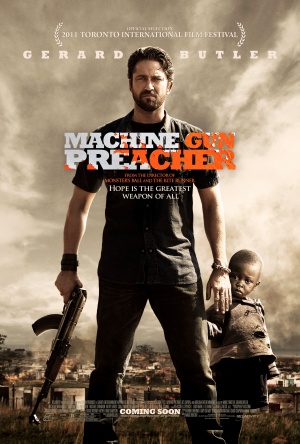