The Nun, the fifth film in “The Conjuring” Universe, is a hugely flawed and underwhelming horror film that’s both plodding and formulaic. While the film, Corin Hardy’s sophomore directorial effort following 2015’s “The Hallow,” boasts convincing performances from scream queen Taissa Farmiga (“The Final Girls”) and Demián Bichir (“Alien: Covenant”), it fails to leverage its Gothic setting and its prize possession: The sufficiently spooky Bonnie Aarons (“The Fighter”) as Valak/The Nun.

Valak first appeared as a demonic presence in James Wan’s “The Conjuring 2,” a horror film met with critical praise and box office success. Valak’s role in that sequel, in an urban English setting, fits neatly into the episodic villainy of “The Conjuring” world. In fact, Wan is dealt an embarrassment of riches in the parent films, so much so that hair-raisers such as Annabelle and other relics are confined to the back room at the home of paranormal investigators Ed and Lorraine Warren (Patrick Wilson and Vera Farmiga, respectively). Valak’s hissing antics in The Nun, however, actually somewhat devalue its presence in “The Conjuring.”

What the two original films excel at are characterization and narrative, as Wan painstakingly takes viewers into Lorraine’s dangerous subconscious, which is brimming with conflict (and through her uniquely stable marriage with Ed as they split time between housework and the paranormal). They also must exorcise complex characters — family members and innocent children alike. Conversely, The Nun is a slow-moving, 96-minute film that drags out laborious scenes, fails to capture the audience and injects jump-scares where the plot often lacks.

Set in 1952, the film begins with the mysterious suicide of a resident of the dreary Romanian convent, Cârta Monastery. An evil presence lurks there, and the Vatican wants to know what it is. They send investigator, “miracle hunter” and former World War II chaplain, Father Burke (Bichir), to the unkempt grounds of the former castle. He’s to be joined by a novitiate (a nun who hasn’t taken her vows), Sister Irene (Farmiga). They’re joined by the farmer who discovered the deceased nun, Maurice “Frenchie” Theriault (Jonas Bloquet, “Valerian and the City of a Thousand Planets”), who brings some levity to the hellish story. What they find inside the walls of the convent is a forsaken holy ground that’s become the playground of distrustful nuns and the shapeshifting apparition in the dungeon, which needs a human vessel to be free of its brick and mortar shackles.

Will Father Burke and Sister Irene be able to navigate the castle corridors and catacombs, to get the jump on the evil Valak? Or will Irene’s troublesome past be a weakness the demon can thrive on?

Hardy’s project is seriously devoid of plot, and it doesn’t seem to mind. While the movie’s opening act suggests real potential — between frame-filling tracking shots of the medieval convent and the intrigue of a religious mystery — it quickly succumbs to its fate of trite storytelling, cheap scares and wholly predictable outcomes. Genre tropes suffuse every square inch of Hardy’s film, which is nonetheless captured nicely by cinematographer Maxime Alexandre (“Earth to Echo”).

There is, of course, a certain archetype to today’s horror film — the innocent, young protagonist finds some unfortunate luck, but somehow manages to emerge unscathed, thanks to the muscle of a potential love interest and the wisdom of a more venerable supporting character. We’ve seen it all before. With a promising concept, what could The Nun have done differently? For one, it should have utilized its eerie, Gothic setting further, to build a narrative around religious fanaticism or the dark side of a severely cloistered lifestyle. Instead, the castle-turned-convent is criminally underused and simply a lifeless set piece that’s home to a type of “portal” in the vein of “Pacific Rim,” which screams B-movie.

The film also hardly uses Farmiga’s talents. Her outward fear, yet silent composure, as Sister Irene is commendable, but there is nothing to truly suggest her past has thrust her into a sinister Vatican investigation in Romania. In fact, the whole operation, including Father Burke’s role and casework, go unexplained.

What’s more, The Nun could have done more to flesh out Valak’s motivation, and its propensity for a nun’s habit. Altogether, Hardy’s efforts fall short, and his film rivals its spin-off predecessor, “Annabelle,” as a surface-level scream-fest without the chops of something like Ari Aster’s “Hereditary” or Robert Eggers’ “The Witch.”

Nonetheless, it almost demands viewing just for the connection to the wider horror “universe.” But for those entering the theater expecting a “Conjuring”-level output — of careful plotting and true world-building — there is sure to be disappointment. That’s because boredom lingers greater than the demon’s many sins. Let’s hope the franchise’s spin-offs end after the raggedy doll and the hissing abbess. 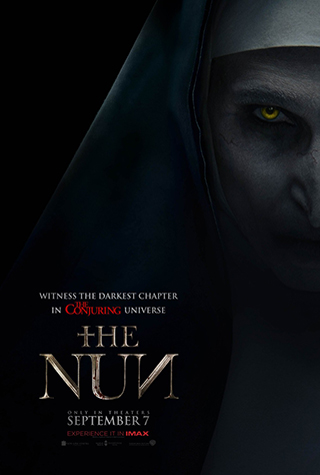