In The Hallow, a couple and their infant son move into an old house that borders a mysterious Irish forest thought to be of malevolent disposition. Spoiler alert: It truly is. There are vengeful beings living in those woods, and they’re none to pleased to have the family traipsing about.

Adam and Clare Hitchens (Joseph Mawle, “Abraham Lincoln: Vampire Hunter” and Bojana Novakovic, “Edge of Darkness”) have been living in the rural home for about a month, and the nearby town has not exactly received them warmly. The Hitchenses are treated similarly to Dr. Frankenstein’s many descendants; they are warily regarded as trespassers whose presence will only serve to stir up the evil attitude of the creatures in the forest.

It turns out that there have been numerous sightings of these creatures over the decades, creatures thought to steal young children from their parents. One such parent is a neighbor of the Hitchenses, Colm Donnelly (Michael McElhatton, “Albert Nobbs”), who does everything in his power to persuade the family to leave town. He’s not successful.

Adam is a conservationist. During a walk in the immense woods with his son Finn, he notices a viscous, black fluid dripping from the decaying corpse of a full-grown deer. Curious, he takes a sample back to the house, where he notes that the cells within the sample are pretty damn active — aggressive, even. And soon, Adam is entertaining his bemused (and somewhat befuddled) wife with tales of parasites that attack ants, turning the ants into controllable automatons. This is information that may come in handy later.

The story moves along at a deliberate pace for a good part of the film, but when the real action comes, it’s a real full-tilt boogie. So much happens in a frantic, chaotic final night in the house to leave the audience breathless — and yet not so out of control that one cannot follow the action. Which is saying something, because much of the latter part of the film takes place at night, under low-light conditions.

Mawle and Novakovic are well paired and seem to have a good rapport with each other. It’s a sign of the fine storytelling, too, that it never feels as if either main character simply flips a mental switch from being victim to being a proactive savior, as may happen in many lesser thrillers. Their empowerment is believable, even if it is somewhat exaggerated.

But the real budget was for the special effects. There are no clumsy humans stumbling around in rubber suits; there are instead varied, individual beings that thrive on the cloak of darkness. The visuals of The Hallow are quite stunning, in the same vein of Guillermo del Toro’s “Pan’s Labyrinth.” Organic webs branch out and encapsulate inorganics, rendering technology a mite useless. It’s all a mix of CGI and practical effects, and the result seems much more frightening than would a straightforward CGI bag.

And when all these elements are combined together by director Corin Hardy — although I saw it as part of the Spooky Movie International Film Festival in Silver Spring, Maryland — it makes The Hallow a near perfect companion to the All Hallows’ Eve celebrations. 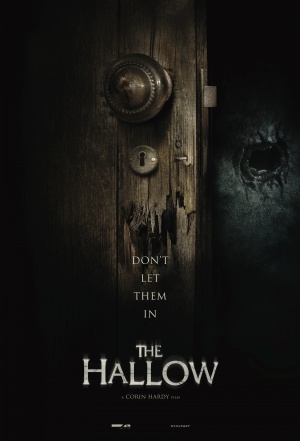