Clumsy action thriller Momentum may as well be retitled “Further Proof That Morgan Freeman Will Star in Anything.” The towering talent who has played everyone from Robin Hood’s sidekick to God is cinematically ubiquitous and yet has long since remained respectable while slipping deeper into embarrassing paycheck territory. One has to think that the reason an actor who still gets big blockbuster gigs would bother with such dreck as this is because hardly anyone will ever get around to seeing it. The logic is probably sound and if Freeman wants to slum it as a shady Senator in a role that probably only required him to be on set for a few days, then fair enough. It just feels a little unnecessary, much like Momentum itself.

To be fair, while Freeman has the luxury of taking whatever role his schedule allows him to squeeze in, the lead of Momentum, Olga Kurylenko, is a much rarer presence onscreen. Despite having achieved the unlikely combo of being a Bond girl (“Quantum of Solace”) and the female lead in a Malick movie (“To the Wonder”), Kurylenko hasn’t really broken through to the big time yet. So given her overall lack of exposure, it’s certainly nice to see her front and center as an action heroine, even if the vehicle she’s in is pretty shabby. And this movie is absolutely all about her.

If director Stephen S. Campanelli accomplishes anything of worth here, it’s in trusting the lithe, strikingly beautiful Kurylenko to carry his movie as a brutally ass-kicking woman on the run. Most of the movie involves the star running afoul of her pursuers and beating them to a pulp. And while some of her line deliveries are a little shaky at times (as are the lines she’s delivering), she makes a formidable heroine in the context of a rather generic cat-and-mouse chase.

The script is certainly a problem here and not simply because of the recycled, instantly forgettable dialogue. There’s a clunky distribution of exposition and backstory that stalls the movie’s, ahem, momentum. The story takes one too many bland turns with its coverage of a heist that ruffles the feathers of one particularly dull bad guy (James Purefoy, “John Carter”) who will stop at nothing to stop Kurylenko’s embattled super-thief.

Momentum consistently feels like a mirror image of so many other mediocre action movies and the lack of originality is simply tiring over time. The plot goes through the usual motions in the usual way, so while the movie may not be a chore, it certainly teeters on the edge of being a bore. Kurylenko is fun to watch and Purefoy’s villain is annoying enough to make the audience actively root against him, but these elements don’t add up to much in the end.

Shooting the movie on location in Cape Town at least creates some separation from otherwise similar Hollywood-set pics, but little is done with the exotic locale. A big finale is appropriately entertaining as it gives Kurylenko’s Alex her best moments of slyly outsmarting her enemies and Campanelli at least directs the sequence with a sense of urgency.

Action junkies might find some mild enjoyment in the pic’s cheap thrills and it’s certainly nice to see Kurylenko play such an unstoppable force, but there’s not enough here to distinguish Momentum from its many like-minded cinematic cousins. It’s all plagued by the cheap stink of inspiration-free familiarity. We’ve seen it all before, done better and more memorably and probably featuring Morgan Freeman, too. 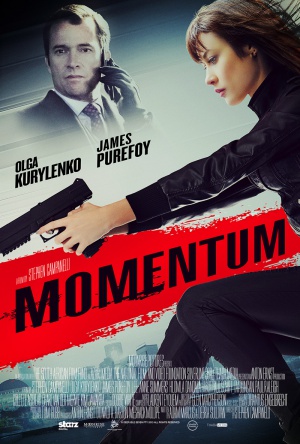