A franchise’s future often lies in its past. The narrative need to look back upon the legacy of a series starter and the history of its characters provides a clear entry point for many sequels that may otherwise struggle to justify their existence beyond merely financial reasons. It’s a strategy used to moving effect in the long-awaited “Frozen” follow-up feature, which is all about forging the path ahead by looking back and marrying the old and new.

A couple cute shorts have satiated fans since the blockbuster original’s 2013 release, but Frozen II requires significantly greater ambitions to carve out a tale worthy of the first movie’s heavy heart and capable of peppering the feature length with thrills and surprises. The result is an enlightening adventure that tumbles down a rabbit hole of moody mythology and comes out the other end a self-assured and touchingly triumphant ode to female empowerment.

There’s a lot to digest in a packed plot that involves a bedtime backstory, a voice calling out to Elsa (voiced by Idina Menzel, “Enchanted”) from across the void, an enchanted forest walled off by a mysterious mist, an indigenous community trapped inside said forest, and elemental spirits that range from rock giants to a fiery salamander, but returning screenwriter and co-director Jennifer Lee, along with also-returning veteran co-director Chris Buck, somehow pulls this all together into a coherent continuation of the first movie’s story.

Lee and Buck face a towering task this time around, considering the phenomenon that “Frozen” became and continues to be six years after its release, but thankfully they resist the temptation to take the easy path of mere duplication and instead opt for a deep-dive exploration of both Elsa’s magical powers and the kingdom of Arendelle’s history.

This approach unearths an unwieldy amount of information needed to effectively assemble the plot pieces in a way that reflects the movie’s theme of understanding the past in order to move forward. Most importantly, the story of a giant dam built generations ago to signify unity between Arendelle and its indigenous forest-dwelling neighbors has to be explained early in order to establish the movie’s mix of the tangible and the metaphorical.

Starting the story with a considerable dump of exposition makes for a clunky first act, but what really matters is how the new pieces are used and it is to that end that Lee’s script devotes so much care and attention. The adventure aspect of the plot is set in motion when a voice calls out to Elsa from the mysterious beyond, leading her to embark on a perilous journey with Anna (voiced by Kristen Bell, “The Boss”), Kristoff (voiced by Jonathan Groff, “Mindhunter” TV series), Sven, and Olaf (voiced by Josh Gad, “Little Monsters”) in tow.

Having the whole gang together allows for potent comic relief and cute character moments designed to please everyone in the audience. The songs are fairly distributed, with Groff’s Kristoff getting a big, boisterous solo number after having only a couple quick lines to talk-sing in the first movie. Olaf gets another song, of course, as does Anna, while Menzel gets to really belt it out in Elsa’s signature tune Into the Unknown, which appears to be written specifically to push her into the highest register possible.

It’s somewhat disappointing that none of these songs — enjoyable as they all are — ever reach the soaring heights of the first movie’s soundtrack, but what the sequel lacks in aural amazement, it makes up for in its emotional expansion of each character’s arc. Everyone in the main cast embarks on a personal journey here and the script maps out a considerable amount of growth for its two leads.

Illuminating the story’s roiling emotions in a vibrant, magnificent manner is the team of animators, responsible here for some truly breathtaking work. Each new Disney animated movie seems to push the pixels to a redefined limit, creating the crispest, most complex visuals yet, but Frozen II is especially spectacular in this regard. Images of Elsa racing across a sea astride the Nokk, a water spirit in the form of a gallant horse, are among the most beautiful moments of the studio’s computer animation era.

Lee and Buck seem to have approached this sequel knowing that the first movie is a tough act to follow and that this continuation exists more for financial reasons than creative ones, but what they’ve come up with for a new chapter is a confident celebration of the franchise, its characters, its internal history, and most of all, its heart. 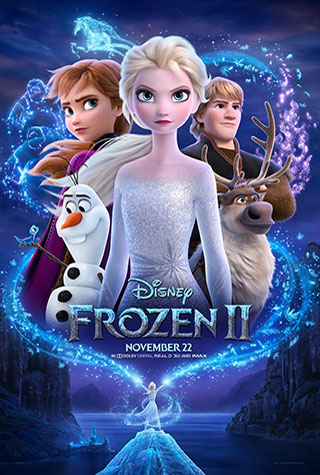