The problem with modern comedies is, well, most just aren’t funny. They take ridiculous, over-the-top situations (which is not entirely bad unto itself), but add a healthy dose of violence, profanity and toilet humor. In the case of a self-parody or genre-bending tale like “This Is the End,” these ingredients usually work; for something like “21 and Over,” or “Ted 2,” among many others, it fails completely. That’s why it was a nice change of pace to finally see something that works — well most of the time — and finally gives a little vindication to Melissa McCarthy (whose recent resume of “Identity Thief,” “Tammy” and “Spy” did not exactly impress the Humor Gods).

The Boss features the Rubenesque actress who was once nominated for an Academy Award (look it up if you doubt my veracity) as a business mogul, financial wizard and media whore who changes her ways — sort of — when faced with a situation she cannot handle and shows she can bring out the fun and vulgarity of her selfish character, as well as the pathos necessary to make us feel anything for the role.

And while McCarthy is fine here, the picture would really be nothing without stellar supporting work, including Kristen Bell (“Veronica Mars”), Peter Dinklage (“Pixels,” but better known for “Game of Thrones” TV series), Tyler Labine (“Tucker and Dale vs. Evil”), Cedric Yarbrough (“The Goldbergs” TV series) and moppet Ella Anderson (“The Possession of Michael King”). Utilizing a screenplay by McCarthy and old friend Steve Mallory and husband Ben Falcone (who also directed), the cast goes with it as far as possible, and, in this case, that’s about an hour and-a-half (which is almost the running time of this enterprise).

More like a deranged version of the 1989 Shelley Long vehicle, “Troop Beverly Hills” than any recent film we could remember, and then crossed with “Get Hard,” the plot of The Boss has McCarthy as Michelle Darnell, a hopeless orphan raised in a run-down Catholic convent. The opening scene of her being returned to the venue after five years (accompanied by a popular song from that era) by disappointed prospective adoptive parents is funny, but a little sad at the same time (“What’s wrong with me?,” she wails to an exasperated Sister).

We soon find out as years later, Michelle becomes a superstar investor and businesswoman (think Martha Stewart without the loving disposition or Donald Trump without the charm, charisma and diplomacy) who commands thousands of people at her money-marketing seminars, complete with screaming crowds, flashy pyrotechnics and horrible rap (is there any other kind?).

Movie fans worth their salt, however, know that this kind of extravagant lifestyle cannot last and, after denying her faithful and under-appreciated assistant, Claire (Bell), a well-deserved raise, she finds herself arrested for insider trading. This is thanks to zoned-out former boyfriend, Ronald (Dinklage), who now calls himself, “Renault.”

After five months in a very low security facility, Michelle finds her home, property and assets seized, and her reputation destroyed. It’s so bad, she cannot even get a deal with Michael McDonald (not the old Doobie Brothers vocalist, but the guy who used to play “Stuart” on “MadTV”). Homeless, she tracks down Claire and guilts her into letting her stay with her and daughter, Rachel (Anderson). Of course, Michelle and the little girl form a bond and when the subject of cookie sales comes up at a “Dandilions” meeting (fictional Girl Scouts), the former business queen has a idea to crawl out of her financial hole.

She and Claire go into business selling brownies (which are evidently the best in the world) and begin stealing Dandilion girls to do so. These scenes are easily the funniest of the film with Michelle fighting Kristen Schaal (“Sleepwalk With Me”) and other den mothers and then culminating the assault by leading a street battle — in slow motion of all things (it’s a good bet viewers have not seen THIS before).

Things do go south, for awhile, and we get to see just what kind of loyalty Michelle has in a rather goofy, drawn-out conclusion.

Yes, some of the jokes do not make the grade, however, most do and for 90 minutes, at least, we can have a few laughs. Am I setting the humor bar pretty low here, probably and many critics are already panning the movie, but it isn’t a terrible waste of time. Beware, though, The Boss is as far from a family-friendly picture as one could get and the obscenities fly fast and furious (some would even say featuring a cast of youngster with this language is quite inappropriate; that’s up to parents to decide). That’s not the most ringing recommendations to make, but I have seen worse from this actress, believe me, much, much worse. 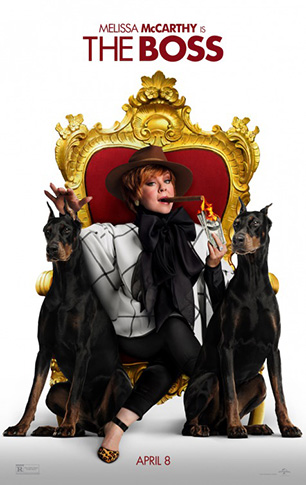