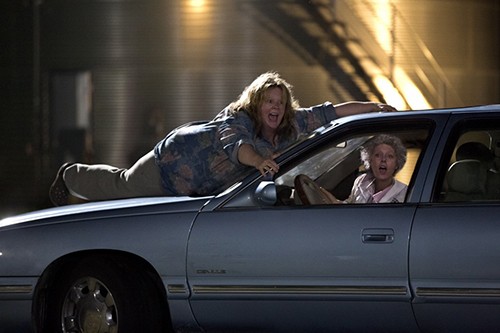 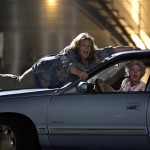 Tammy Banks (Melissa McCarthy, “The Heat”) is having the bad day to end all bad days. Thanks to a deer with a death wish she has managed to crash her poor excuse for a car and then get fired from her dead end job at the depressing burger joint Topper Jacks. To top it all off she then comes home to find her husband Greg (Nat Faxon, “The Way Way Back”) sitting down to an overly intimate dinner with the next door neighbor Missi (Toni Collette, “Fright Night”).

Understandably this sends Tammy over the edge and she makes the rash decision to bail from her small town home before it completely swallows her up. Now “wheel-less” and with only $63 to her name, she’s beholden to her atypical “alcohol admiring” grandmother, Pearl (Susan Sarandon, “Cloud Atlas”), as she’s the one with the functioning car and the cash. They hit the road ASAP and since Pearl’s provided the transportation and travel budget she gets to choose the destination, Niagara Falls. The question is now that Tammy’s escaped, will she still continue to live in her own personal confinement or will she finally learn to start to living life to the fullest?

Tammy was a labor of love for real life husband and wife team McCarthy and first time feature director Ben Falcone who wrote the screenplay together. Talking about the project McCarthy says “Ben and I had always talked about writing a movie about real people who mess up and have to decide if they are going to keep making mistakes or change things.” Tammy fails to see that the one person who can change her miserable existence is herself; instead she spends the entire time blaming everyone else around her. Time in an enclosed space with her polar opposite grandmother Pearl is just the medicine she needs.

At only 67 (24 years older than McCarthy) Sarandon does not make a convincing granny, nor mom to 54 year old Allison Janney (“The Oranges”) who plays Tammy’s mother, Deb. She’s clearly much too young for the role but gives it her best shot — even going as far as to put peppercorns in her shoes to make her walk more gingerly. Costume Designer, Wendy Chuck, claimed that “Pearl represented a challenge. We had to turn beautiful Susan into a believable grandma of a certain age. The wig really helped as did finding pastel colors in a loose fit.” Hardly.

But while Sarandon may not physically pull off the grandma look, her combination of gentle softness in Pearl’s sober moments and nightmare granny in Pearl’s drunken moments creates the most successful character in the entire film. 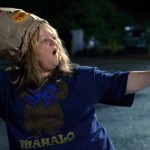 Evidence of McCarthy’s two best strengths: Crudeness and great physical comedy is present right from the beginning of Tammy. There isn’t much McCarthy won’t do for a laugh — most scenes have her falling down in some capacity and in one of the better scenes in a spur of the moment decision she decides to rub her hair and lick burger buns after being fired. Unfortunately, the majority of these setups are married with a strange intensity that smacks of trying too hard. As Tammy progresses on her journey of self-discovery and visibly calms down, McCarthy relaxes into the role and Tammy becomes more believable and likable.

Helping Tammy on her literal road to salvation is a top-notch supporting cast who aren’t all used to their potential. Dan Aykroyd (“The Campaign”) as Tammy’s dad, Don, falls into this category, while Kathy Bates (“Midnight in Paris”) as Pearl’s fun-loving lesbian cousin, Lenore, fares better. With such an accomplished cast attached, Tammy should have been a blast from start to finish. It has its funny moments (and will definitely appeal to those with a more slapstick sense of humor) but it wasn’t 100% sure what it wanted to be. The pace is far too quick and in-your-face at the beginning and by the end it calms down into a “will they or won’t they” romance between Tammy and Bobby (Mark Duplass, “Zero Dark Thirty”), a guy who she meets in a country-western bar.

Yet despite its many guises (and flaws), Tammy is a sweet film with a good heart. It just takes a lot of patience to sift through the contrivances to notice. 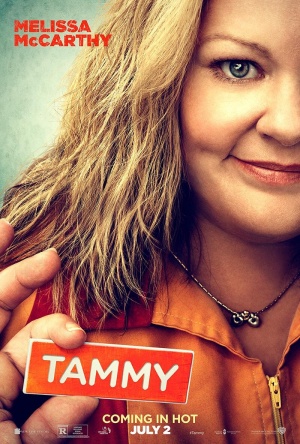