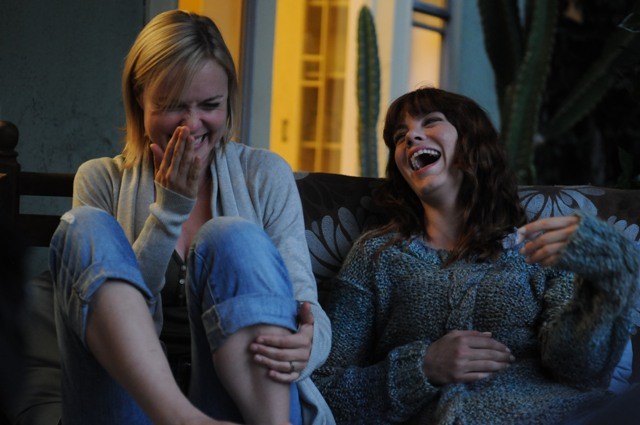 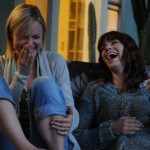 Although Expecting is advertised as a comedy drama, it’s undeniably much more of a drama, with the occasional laugh thrown in. This format is not necessarily problematic within itself, but when it comes packaged in such a joyful poster, it invariably comes as a bit of a curve ball to suddenly be faced with so much emotion. Admittedly, the premise suits itself far better to tears than laughter, but the fact that the script is determined to try to keep things light ultimately ends up inhibiting the film from eliciting either emotion completely, putting the brakes on one just as we’re beginning to embrace it.

Lizzie (Radha Mitchell, “Olympus Has Fallen“) has been struggling to get pregnant for years, planning yet another round of IVF treatment as the film begins, but it is immediately clear that her husband Peter (Jon Dore) is not equally invested in this desire. The treatments are not only costing the two money, but their very happiness together. This is unfortunately portrayed through a variety of genre tropes: He takes his anger out on the dog, she rejects his attempts to make love, and of course, the two are seeing a relationship counselor. Clichéd as these may be, however, they are effective, and the tension is constantly palpable. It is into this situation that the film introduces Lizzie’s best friend Andie, played by Michelle Monaghan, best known for “Source Code” but doubtless most appreciated in the lesser known “Kiss Kiss Bang Bang.” Andie is exactly what Hollywood conditions us to expect of a reckless single woman living out her days of carefree youth a little too long to be considered socially acceptable — quirky, promiscuous and wildly incapable of respecting social boundaries. The yang to Lizzie’s responsible, reliable yin, the two friends have evidently known each other for a long time and are as close as sisters.

Naturally, when Andie becomes pregnant as a result of a one-night stand and feels incapable of raising a child herself, she decides to give the baby to Lizzie, and moves in with Lizzie and Peter for the duration of her pregnancy. But despite the film essentially centering around the friendship they share, it fails to portray any of the joys the two share, instead focusing on the problems they have to struggle through. Provided with no tangible basis for their closeness but a simple guarantee that it’s there, we’re left struggling to see why the two are friends at all. The same applies to Lizzie’s relationship with Peter; brought into their lives at a time of discord, we have no point of reference that suggests the relationship was ever more successful. Peter’s brother Casey (Michael Weston, “State of Play“) is also thrown into the mix — a recovering drug addict who resents his brother’s condescension and longs for independence — and serves to further cause chaos within the house. The biggest problem with these characters therefore is not that they aren’t well developed, but that they aren’t likable, making it difficult for us to sympathize with their situations. 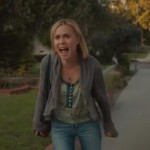 Expecting is also riddled with unrealistic situations, the most notable of which are the therapy sessions that Lizzie and Peter take with Dr. Grayson (Mimi Kennedy, “The Five-Year Engagement“). She not only fails to provide them with any useful counseling or advice whatsoever, but also talks to them in a completely unprofessional and unbelievable manner, frequently describing how she’s bored with their problems and failing thoroughly to seem like a real therapist at all. While we understand the possibilities of comedy provided by an ineffective therapist with problems of her own, this is overplayed to the extent that the situation becomes deeply uncomfortable and artificial. The ending, however, and the direction it takes, is perhaps the least affected aspect of the film, with the actions of each character falling well into place with what we know about them already. Indeed, it is in the final stages of this film that one begins to get the impression that it has much more to say than it managed to successfully put across, and this is largely due to the fact that it finally sets aside its forced attempts at humor, allowing the emotions and situations to be much more genuine.

A debut feature from director and writer Jessie McCormack, Expecting makes some fatal flaws that prevent it from settling into our hearts, with very little to make it stand out at all, and any moments that could be considered distinctive are unfortunately so for the wrong reasons. It’s not all bad, with the cast particularly making the best of a mediocre script, but this only makes it more frustrating, allowing us to see its potential before crushing our expectations. The result is an unsatisfying experience that feels like more like a talented draft than a finished product. 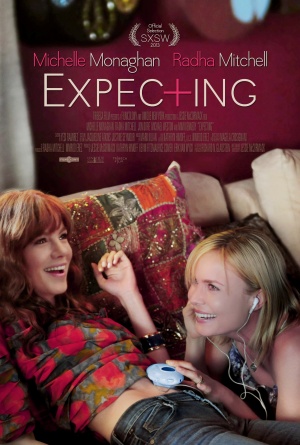