Night Comes On is a powerfully told and emotionally intelligent feature debut from director Jordana Spiro. By focusing on creating a connection with their characters, Spiro and co-writer Angelica Nwandu infuse an otherwise typical story with not only originality, but also care and empathy. Night Comes On thus becomes neither a coming-of-age tale nor a revenge drama, but instead a gentle exploration of these worlds — and refreshingly — through a consistently black female gaze.

Angel (Dominique Fishback, “The Deuce” TV series) has just been released from juvenile detention, where she spent a year serving time for illegal possession of a gun. Upon release, her first task is to set out to acquire another gun. Why the obsession with firearms? The thing that seems to drive Angel more than anything at the start of this journey is her desire to seek revenge upon her father, who murdered her mother in front of her, but was not convicted due to a lack of evidence. Angel’s determination to right this miscarriage of justice sits quietly under her every action, and makes inconsequential the prospect of returning to incarceration. Of course, the realities of navigating the world as not only a black woman, but also an ex-convict, get in the way of her goal, and Angel is left questioning whether the horrors of her past are worth throwing away her future for.

It is in the course of her search for her father that Angel is reunited with her younger sister Abby (Tatum Marilyn Hall), whose foster home experience is both shocking and yet painfully common. The two sisters set off together to find their father, but with very different ideas in mind. Abby, whose innocence and youthful optimism shine through despite her difficult early life, just wants her sister back. Angel, on the other hand, is more convinced than ever that the best way to protect her younger sister is to carry out her plan of vengeance, even if that will lead to the two being separated.

Dominique Fishback is undeniably talented, and has the confidence and skill to play this role with a grounded, unhurried approach. She does not scream her emotions — either verbally or physically — but instead trusts the audience to pick up on her subtlest movements, which means she always has our undivided attention. Hall, meanwhile, is absolutely amazing to watch as she navigates the complexity of Abby, a girl who is both emotionally open and reserved, both vulnerable and guarded. With a charm that makes the audience smile involuntarily, Hall effortlessly finds the balance needed to keep bringing the lighthearted side out of a relatively somber story.

The themes driving Night Comes On make it clear that Angel’s revenge is an underlying, secondary narrative, while the focus remains on examining the bond of sisterhood. The scenes in which Angel and Abby navigate their reunion and their new relationship provide the pulse of this film, beating to keep alive a sense of family that has long been dormant. The girls may have lost their mother, but their connection to her is clearly visible throughout, and it is particularly poignant that their mother’s love of the sea creates the setting for a pivotal scene in which the film simultaneously washes away the past and forces a decision about the future.

First seen at Sundance, Night Comes On has the opportunity to fall into a lot of festival traps: Angel and Abby Lamere are the picture of cheated youth, girls who were forced to become women before they were ready. It never does, however, choosing to value its characters more than to let them serve as either a cautionary tale or tragic poverty porn. With a female-led cast and crew that have evidently devoted time and soul to its creation, I hope Night Comes On serves as a reminder of the wonderful effects of allowing fresh and diverse voices to be heard. 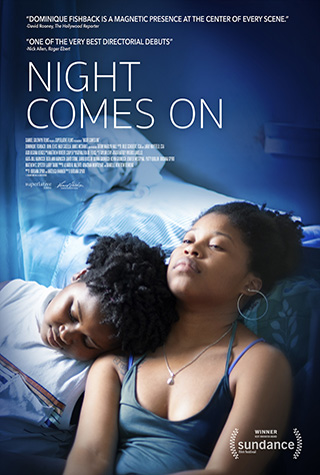