If the “Mission Impossible” film series hadn’t solidified itself as one of the most thrilling action franchises to date, it surely has subscribed to the title after its latest installment, Mission: Impossible – Fallout. The sixth installment to the franchise tracks the return of the battle-tested and highly qualified IMF agent Ethan Hunt (Tom Cruise, “Jack Reacher: Never Go Back”) and his small group of trusted affiliates, as they attempt to divert the plans of returning villain, Solomon Lane (Sean Harris, “Mission: Impossible – Rogue Nation”) and a newly acquired group of followers aptly called the Apostles. The group’s plan to bring about peace, diabolically requires the implementation of catastrophic nuclear events and in the process, the infiltration and destruction of the IMF itself.

The resulting rat race, is nothing short of the franchise and quite frankly, the genre, at its peak with a few signature face mask reveals included for good measure. Tom Cruise is again the quintessential leading man, and Mission: Impossible – Fallout shows that despite what his age and films with less nuance may suggest (looking at you “The Mummy”), he can still carry a film and particularly a character with a forgiving dedication that may be unrivaled in modern Hollywood.

While the plot of the film may generally sound familiar to themes of previous installments of the franchise, renewed writer/director Christopher McQuarrie manages to balance refreshing development of characters with the jaw dropping visual storytelling that has made the franchise nearly $3 billion dollars at the box office to date. Combine these elements with the superb addition of new characters like August Walker (Henry Cavill, “Batman v Superman: Dawn of Justice”), a special activities operative, and CIA Director Erica Sloane (Angela Bassett, “Black Panther”), and it culminates into one of, if not the best movie this franchise has to offer.

The first half of Mission: Impossible – Fallout sees Ethan Hunt, accompanied by his trusted allies, Benji Dunn (Simon Pegg, “Star Trek: Beyond”), and Luther Stickell (Ving Rhames, “Father Figures”), as they are tasked with finding the Apostles and disrupting the acquisition of plutonium cores which will be used for nuclear warheads. Along the way, the crew is not only derailed by perceived enemies but allies as well, as groups like the MI6 led by Ilsa Foust (Rebecca Ferguson, “The Greatest Showman”) and the CIA led by Erica Sloane have their own missions to pursue.

One of the more intriguing elements of this action-thriller is that these groups all have similar goals in pursuing to stop Lane and his Apostles but each group has its own methods, some being more heavy-handed than others which creates a rift between the films protagonists. McQuarrie’s inclusion of this division creates a level a tension that gives the audience true glimpses into the development of the film’s characters as they are truly tested not only by the “bad guys,” but by other “good guys” as well.

This is where, as Ethan Hunt begins to question who he can trust, the versatility and sheer ability of Tom Cruise’s star-power shines brightest.

But the real draw — shortly after the audience is emphatically pulled into the film’s twist ridden plot and they are reminded of why these films are as successful as they are (and its not because of how often a character removes a mask) — is because of Cruise and the production team’s (especially cinematographer Rob Hardy, “Ex Machina”) sheer dedication to delivering incredible action sequences with effects and stunts that are second to none. If one is not on the edge of their seat while watching Ethan Hunt race through the streets of Paris on a motorcycle at top speeds, they sure as hell will be once Hunt has to literally jump from building to building to stop a nuclear event from happening.

When it comes to the blockbuster action genre and franchises with multiple installments, one would be hard-pressed to find another with the cohesiveness and unmitigated consistency that the “Mission Impossible” series has enjoyed. Mission: Impossible – Fallout is such a good entry, in fact, it would be a welcome return should McQuarrie choose to direct (and write) the franchise for a seventh installment. While other series attempt to fight-off franchise fatigue and negative critical reception, for Ethan Hunt and the rest of the IMF, things seem to only be getting better. 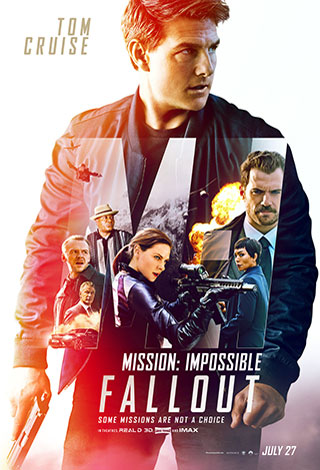