In a world where most modern monster horror/thriller hybrids are regulated to Netflix or the SyFy channel, its interesting to see a monster flick about wild alligators terrorizing people during a hurricane has managed to work it’s way into theaters instead of one of the countless streaming sites or a dusty corner on basic cable. One could argue that it may have been more successful on one of those platforms, however, I would argue that, that would only be the case if the film, Crawl, wasn’t as good as it actually is.

Despite being a movie that many members of the press didn’t get a chance to see early, due to the studio’s thought’s that it wasn’t the type of film critics would praise, the film goes above and beyond the typical monster movie tropes to be a more than satisfying thriller. Relying on claustrophobic set pieces, surprisingly big budget effects, and a small yet committed cast, this film does not go the route many people may expect from it’s marketing and theme. Sure, the jump scares are there, so are a few disposable side characters and a significant amount of plot armor, but the jump scares aren’t cheap, the alligator food side characters have motivations, and the main characters fight so hard to survive that their plot armor seems deserved.

It all culminates in an extremely provoking B-movie that displays horror director Alexandre Aja’s patience and growth since the days of “The Hills Have Eyes” and “Piranha 3D.” This film’s greatest strength despite it’s outlandish premise is it’s devotion to it’s environment, it’s shockingly accurate presentation of alligators, and Aja’s stylistic — yet raw — approach to capturing the aura of being trapped in a crawl space with a prehistoric creature. It’s further propped by the film’s leads, Kaya Scodelario (“Maze Runner: The Death Cure”) and Barry Pepper (“The Lone Ranger”), who handle the outlandish script — which involves Florida, a Category 5 hurricane, a flooding home, and looters — with a level of sincerity and commitment that is rare for this genre.

Scodelario especially is impressively convincing as swimmer Haley Keller who journeys down to southern Florida to find her father Dave (Pepper). Both performers are committed to portraying the familial and personal issues of these characters and how their experiences drive them to survive. An appropriate amount of time is spent developing them (it’s brief but it works) and by the middle of the movie we’re so far into this disaster that you can’t help but root for these characters whom you feel like you’ve gotten to know quite well in just a few short minutes.

This brings forth the topic of the running time, which, at just 87 minutes, provides a textbook example of how to set-up, pace and create a modern creature thriller without boring or isolating your audience with unneeded filler material (although Aja is guilty of reusing a few situations). And even with a minor budget as compared to recent monster movies like “The Meg,” Crawl more impressively pays homage to the genre while also enforcing it’s own credibility.

Whereas most creature features and/or B-movies ultimately find their home somewhere other than the big screen, it’s refreshing a worthy one has bucked the trend, risen from the pile of mediocrity and leapt for the theater experience. Crawl was made for the theater atmosphere, and horror and thriller fans alike will applaud it for it’s gore, claustrophobic action, and isolated moments of tension. For every big-budget franchise horror film made, it’s movies like this that excites — unexpected gems that show filmmakers can take chances creatively if they’re committed and well-intentioned with their content (no matter how outrageous it may be). 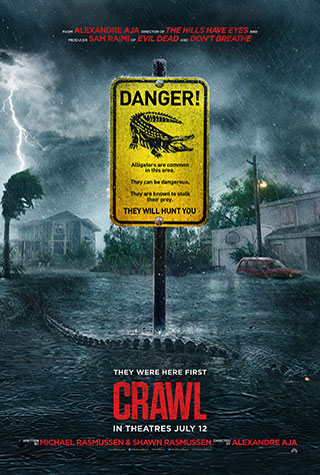