A breathtaking fantastical journey through the height of Hollywood’s most reputable and rebellious era is simultaneously a justified and monotonous way to describe Quentin Tarantino’s ninth film, Once Upon a Time … in Hollywood. Seeing classic views of the golden age of Tinseltown through the lens of the enigmatic and sometimes overbearing filmmaker is shocking when absorbing this film, but in the most pleasant of ways. With this entry now under his belt, Tarantino has not only solidified himself as one of the most prominent and gifted directors of the 21st century, but with this roller coaster of a script, has presented himself as still one of the most versatile writers that Hollywood has ever seen.

Despite his trademark approach to grisly content and non-traditional storytelling, Tarantino approaches Once Upon a Time … in Hollywood with a level of delicacy and patience that is unrivaled, making what seemingly could have been a tasteless attempt at capitalizing on an unsettling story, into an inspired ode to Hollywood and it’s most grandiose tales.

Presenting itself as a twisted perspective of the Tate murders of 1969, this genre bending film warps the expectations of its audience from the very introduction of our main characters, fading TV star Rick Dalton (Leonardo DiCaprio, “The Revenant”) and his stuntman best bud Cliff Booth (Brad Pitt, “Fury”). These men are not our heroes or even our protagonists, but they are our vehicles, transporting us through a world that Tarantino clearly deifies. Once they are introduced, and our expectations are patiently subdued, we are transported into a world that seems like a continuous fairy tale.

As we follow Dalton and Booth through the streets of Hollywood and beyond, the fable gets more interesting as we’re introduced to an assortment of interesting characters that represent the good, the bad and the ugly. We meet people like Dalton’s agent Marvin Schwarzs (Al Pacino, “The Revenant”), Bruce Lee (Mike Moh, “Empire” TV series), the ill-fated Sharon Tate (Margot Robbie, “I, Tonya”) and those that would do her and her house guests harm, Charles Manson (Damon Herriman, “The Little Death”) and Squeaky Fromme (Dakota Fanning, “Ocean’s 8”).

As this assortment of personalities entertains, cinematographer Robert Richardson’s uniquely dreamy and authentic cinematic landscape elevates this slowly evolving comedic drama between two best friends into a magnified love letter to the 1960s, Hollywood, and especially Westerns as Tarantino uses every performance from even the smallest of contributors (Robbie being the most publicized) to paint the picture of his inspirations. While his trademark style is still unapologetically peppered throughout the film, it never becomes tasteless or overdone (as some would say “Inglourious Basterds” or “Django Unchained” is). Somewhere within the edit room is a version of this film that is much less majestic (this clocks in at nearly three hours), however, Tarantino manages to keep Once Upon a Time in Hollywood on point with the help of editor and frequent collaborator Fred Raskin, who’s subtle touch gives the film near perfect cadence.

Love Tarantino or despise him if you will, but after Once Upon a Time … in Hollywood I do not think that his dedication to the craft of movie making can be questioned. When a director approaches not only a unique topic but a unique era with the level of passion, sincerity, and creativity that Tarantino has in this movie, it’s nothing short of vivid and all-consuming, making this one of the most imaginative and entrancing stories of Tarantino’s career. 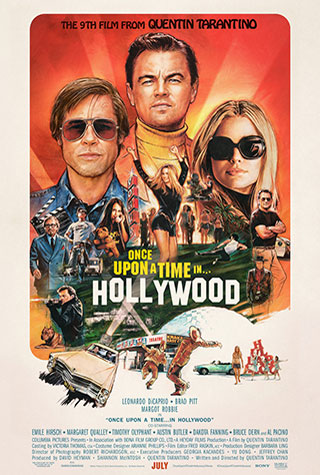