The mid-90s was not a particularly good time to be a former (or current) athlete as many of them found themselves clouded by controversy and courted by disgrace. For instance, take a look at the likes of the globally sensationalized ex-football player O.J. Simpson and Olympic figure skater Tonya Harding. O.J. has had several movies made about his murderous case (“The People vs OJ Simpson” being the latest), while Harding — an equally maligned sporting pariah —
hasn’t enjoyed the same level of reflection. Now, with Craig Gillespie’s strangely gripping, touching and absurdist biopic I, Tonya, the beleaguered and brash blue-collar ice princess and her motley crew of clumsy-minded undesirables get their day in the sun.

Gillespie (“Fright Night”) invites viewers, via a mockumentary-style format, to delve into the cockeyed events that led to the insanity that was the “police baton smash on the knee heard around the world” that was committed against Harding’s fiercest rival Nancy Kerrigan. Skillfully, Gillespie and screenwriter Steven Rogers’ (“Love the Coopers”) arousing approach to retelling this incident that gave an entertaining appeal to Kerrigan’s “Beauty” and Hardin’s perceived “Beast” is rather brilliant in its corrosive campiness.

However, I, Tonya does not give the audience the definitive answers to all the questions surrounding the Kerrigan attack that was carried out so awkwardly in January 1994 at a Detroit ice arena by Tonya’s ex-husband Jeff Gillooly (played convincingly by Sebastian Stan, “Captain America: Civil War”). Left open is whether Gillooly and his moronic misfit helpers acted alone in the plan to take out Kerrigan to benefit his ex-wife’s chances at the Olympic Games or if Tonya Harding (Margot Robbie, “Suicide Squad”) had known all along what transpired and was complicit in this botched scheme to cripple Kerrigan. Invitingly, I, Tonya turns these scandalous proceedings into a fun-loving, trashy-themed train-wreck of deplorable dunces turning on each other and offering their unsavory take of their heinous actions.

As a dark comedy, the film details the struggled upbringing of a young Harding — a vulnerable girl with an elusive auto mechanic father and harsh/hardened low-paid waitress mother LaVona Golden (masterfully portrayed by Allison Janney, “The Girl on the Train”). Despite being sickly, poor and neglected in the middle of nowhere Portland, Oregon, young Tonya’s interest in taking skating lessons would cultivate into something spectacular — her eventual glory as U.S. champion figure skater and World Champion silver medal winner. No one could think that the desperate and disillusioned Tonya Harding would qualify for the Winter Olympics in 1992 (Albertville, France) and 1994 (Lillehammer, Norway). Nor could they see that she would become the first American woman to successfully execute the Triple Axel move in international competition. It is not easy to overcome parental abuse at the hands of a diabolical and demanding mother or spousal abuse by a gun-wielding, unstable husband. Nevertheless, give credit where credit is due as Harding’s perseverance prevailed in spite of the personalized demons of her past.

Robbie channels the defiant skating scapegoat with a notable pugnacious spark that resonates with blustery candidness. She is the willing villainess who enthusiastically picks apart through criticism as she claims her innocence in the name of unfairness and getting a bad rap based on the wrongdoing of others. Still, Robbie’s tawdry take as Harding manages to invoke sympathy on the one-time Olympic standout thus forcing the audience to question their skepticism about her, even if only for a moment. As the “Mommy Dearest” element in the movie, Janney’s equally tortured performance as the despicable and critical LaVona, a woman looking to achieve a sense of justification through her daughter’s infamy, is delightfully realized in devilish fashion. Janney’s fiendish and opportunist take as the overbearing, potty-mouthed version of June Cleaver is (by my standards) actually good enough to be considered for a best supporting actress Oscar-nod.

The same goes for Stan’s stunning portrayal of the maligned Jeff Gillooly — a miserable miscreant of a man that one simply cannot take their eyes off. Additionally, Paul Walter Hauser’s (“Kingdom” TV series) over-sized, oafish bodyguard wannabe Shawn Eckhardt is comically winning as the bumbling sidekick to Stan’s thin, no-nonsense Gillooly. The minor oversight in the film may be Caitlin Carver’s (“Rules Don’t Apply”) seemingly invisible turn as the victimized Nancy Kerrigan because she seems rather incidental to the storyline. But hey . . . this is a platform for Tonya Harding, so I suppose elaborating on Kerrigan’s dilemma would undermine the genuine base of Harding’s meaty profile . . .

Tonya Harding, the down-and-out, tabloid tart may not have been a suitable ice darling for Olympic judges, but I, Tonya earns critical respect for its shrewd commentary on the instant gratification of tabloid television/sleazy journalism (led by a creep reporter played by Bobby Cannavale, “Danny Collins”) and the ugly business of high-stakes competition. It makes for a jolting, well-versed satire of sorts, although its true roots remain steadfast in the puzzling rise and self-destruction of Harding’s manufactured celebrity. 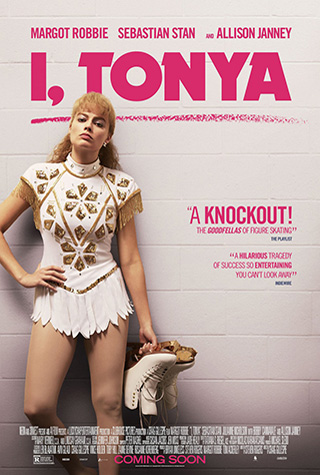