Imagine if “Rear Window” were in motion, the fragmented but persistent yearning to see given (literal) added dynamism. What we glimpse through windows is always partial, but if viewed from a moving train the glimpse is even more fleeting. Then replace James Stewart in a wheelchair with Emily Blunt addled by alcohol and you have the ingredients for an intriguing exploration of perception, voyeurism and memory, all of which come together in Tate Taylor’s gripping and compelling adaptation of Paula Hawkins’ novel The Girl on the Train. With The Girl on the Train, Taylor combines the meta-cinematic voyeurism of Hitchcock’s masterpiece with the constant motion and transience of contemporary society, and delivers an intriguing portrait of isolation and oppression.

Erin Cressida Wilson’s script relocates the novel’s action from London to New York, which might upset purists, but does not impinge on the drama. Alcoholic divorcée Rachel (Emily Blunt, “The Huntsman: Winter’s War”) rides the train back and forth each day, gazing at the house where she used to live with her husband Tom (Justin Theroux, “Wanderlust”), now married to his former mistress Anna (Rebecca Ferguson, “Mission: Impossible – Rogue Nation”). But Rachel is just as interested in the neighbors, Megan (Haley Bennett, “The Magnificent Seven”) and Scott (Luke Evans, “High-Rise”).

Megan appears to have the perfect life that Rachel believes she once had: Devoted husband, gorgeous house and actual proximity to Rachel’s former life. Not that the divorcée knows this other couple, her knowledge of them restricted to what she sees from the train. The viewer therefore shares Rachel’s perspective of what appears to be the perfect couple, complete with moments of sexual passion that adds to Rachel’s sense of vicarious pleasure, intertwined with evident pain. In addition, Rachel’s perspective of herself is distorted, as her alcoholism leads to blackouts and distorted memories, making her a beautifully unreliable narrator. The film’s fragmented storytelling adds to this, as certain key events are replayed to gradually impart further information to the viewer. These replayings often appear as sudden and disturbing flashes, adding to the sense of Rachel’s foggy perception.

Emily Blunt conveys Rachel’s confusion and suffering with a brittleness that never tips over into caricature. Sorrowful expressions and smudged makeup are deceptively superficial indicators of the turmoil within, as Rachel’s pain is expressed through tremulous body language and a cracked voice. And while Rachel’s perspective is limited to what she sees from the train, the viewer gains access to the lives of Anna and Megan. As Anna, Rebecca Ferguson embodies the dutiful wife and mother, governed almost entirely by her husband and living in fear of his ex-wife. This is understandable as, when viewed from Anna’s perspective, Rachel seems dangerously unhinged. Meanwhile, Haley Bennett expresses a palatable sense of anguish combined with inurement, as Megan’s far from perfect life provides clear reasons for seeing a therapist, Dr. Kamal Abdic (Edgar Ramírez, “Hands of Stone”), whose involvement in the unfolding events is perplexing at the very least.

Not only is The Girl on the Train a compelling thriller, but it also has a significant feminist tract, as the film’s interest in female roles and its exploration of the position of women is both compelling and thought-provoking. The three central characters, whose perspectives the viewer shares at various points in the drama, are all women trapped and even defined by their relations with men. Whether wife, ex-wife or sometime lover, the expectations upon these women are repressive and dictatorial. Taylor’s visual style turns the otherwise attractive houses and neighborhoods into gloomy and oppressive environments, more cages than homes. The director of photography, Charlotte Bruus Christensen, lenses much of the film in somber light and dour colors, while also conveying Rachel’s addled mind with shallow focus and a hazy color palette. This grimness, confusion and sense of barely contained threat culminates with a mysterious scene in a tunnel where SOMETHING happens, but neither the viewer nor Rachel is sure what, despite the multiple replayings.

The replayings of this event as well as other visual repetitions highlight the unreliability of Rachel as a narrator, which expresses the silencing of the female voice. Meanwhile, Megan and Anna are also expressive of the difficulties facing women, tied as they are by the expectations inherent in the roles of wife and mother. Pleasingly, the film is far from a diatribe of misandry as its sidelining of its male characters serves to place the roles and choices of women center-stage, therefore highlighting the oppression of women without laboring the point. Crucial to this presentation is the presence of an alternative, in the form of police detective Riley (Allison Janney, “Spy”), a woman whose identity has no direct relation to men (her partner barely speaks). Therefore, the film demonstrates that restricted, subjugated roles are not inevitable for women, but that institutional and societal forces have very damaging consequences, often more subtle than might be expected. Through its portrayal of three women in malevolent and unsettling circumstances, The Girl on the Train is both a gripping thriller and an effective and provocative social commentary. 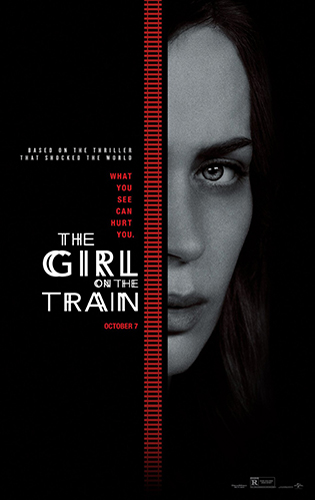