Bullying normally leads to lasting enmity between the perpetrator and the victim. Only occasionally does it lead to friendship. Rarely does it lead to love, but such is the case in André Téchiné’s (“In the Name of My Daughter”) masterful coming of age drama, Being 17 (Quand on a 17 ans), his best film since the 1994 “Wild Reeds.” Co-written by director Céline Sciamma (“Girlhood”) and set in the Pyrenees Mountains in the South of France, the film opens with the sight of a lonely boy trudging through winding snow-covered mountain roads on his way to school, a journey partly on foot and partly by bus that takes him an hour and a half each way.

The boy is Thomas Charpoul (Corentin Fila), a biracial Algerian boy of seventeen who has been adopted by a white farming family and whose feeling of alienation from his parents, Jacques (Jean Fornerod, “Polisse”) and Christine (Mama Prassinos, “Leaving”) carries over to his behavior at school. Usually, one of the last to be picked for a basketball team in gym class, Tom’s anger finds an outlet when he deliberately provokes another classmate Damien Delille (Kacey Mottet Klein, “Sister”), tripping him as he goes back to his seat after reciting a poem by Rimbaud in front of the class and shoving him to the ground after school.

Damien is a tall, slender boy who could not be more different than his nemesis. He is a committed student, emotionally stable, and close to his mother Marianne (Sandrine Kiberlain, “The Sweet Escape”), the only doctor in the small town. As performed by Kiberlain, she is a three-dimensional figure whose warmth and humor light up the screen and the film is her story as well as that of the two boys. Damien’s father Nathan (Alexis Loret, “In Harmony”), is an Army pilot who is engaged in an unspecified conflict in the Middle East, but is away from home often but still plays a strong role in the Damien’s life. Not cowed, Damien takes lessons in self defense from family friend Paulo (Jean Corso, “Little Hollywood”) and plans to retaliate but circumstances change the dynamics.

When Marianne visits Christine to treat her pulmonary infection, she discovers that her patient is pregnant. Unaware of the conflict between the boys, she invites Thomas to stay at their house during his mother’s pregnancy so that he can keep up his grades. While on the surface it is a decision that seems contrived except that Marianne has dreams about having an affair with Tom. Though the violence between the boys continues even as they share the same house, Damien recognizes new feelings when he sees Tom take off his clothes and dive naked into a lake in the middle of winter.

Startled by his physical attraction, he tells him later that, “I need to know if I’m into guys or just to you,” but the answer remains unclear and their homoerotic relationship only develops after an initial period of fear and confusion. What stands out in Being 17 is the naturalness of the two boys and the chemistry they have together. This authenticity extends not only to the way they speak to each (neither are very vocal) or look at each other, but to their body language even when they are fighting, as if they are happy to be receiving the other’s attention. Not enough can be said about the work of Klein and Fila. Their performances resonate with conviction and create a uniquely moving experience. 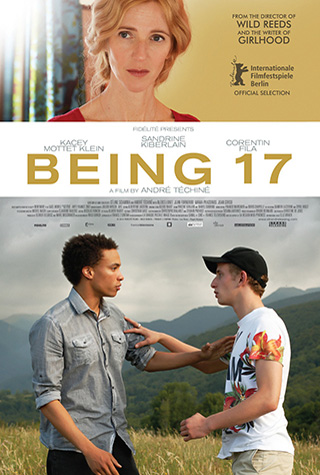