20th century author and poet, Raymond Carver, is oftentimes recognized for his impact on short story writing. In the 1980s, when the medium first began to falter, short stories had become a tough sell for publications because of their briefness, however, that did not stop the author, who had admitted to being “inclined to brevity and intensity.” Until his death in 1988, he’d released several collections (including “Furious Seasons,” “Cathedral,” and most famously, “Will You Please Be Quiet, Please?”). His tight economy on words and stripped down narratives drew comparison to works by fellow novelists Tobias Wolff and Anne Beattie. As with many popular authors, a number of his works have already been adapted for the big screen. Now, former commercials director, Dan Rush, in his theatrical debut, joins the troupe with Everything Must Go.

Based on the story “Why Don’t You Dance?,” the film is headlined by Will Ferrell, who stars as Nick Halsey. Accompanying the actor’s rare dramatic turn are Rebecca Hall, Laura Dern, Stephen Root, and Christopher Jordan Wallace. Everything Must Go revolves around Halsey, a talented salesman who is not only fired for his alcoholism but is also handed divorce papers. Locked out of his house — his possessions thrown out on the front lawn, his phones suspended, credit cards blocked, and corporate car repo’d — he decides to hold a yard sale in an attempt to start over. In this journey, Halsey befriends Kenny Loftus (Wallace), a socially awkward boy who yearns to play baseball, and Samantha (Hall), a pregnant photography teacher who has just moved into the neighborhood. Together, they prove to be key influences in Nick’s success.

The principle idea is the secrets that we all harbor behind closed doors; whereas Nick has all of his problems plopped down on his lawn (literally and figuratively), his neighbors have double lives. One example is Samantha, who hides a fear of her husband, who is out on business, not returning to her and their unborn child. Another is Elliot (Stephen Root), one of Halsey’s neighbors, who scoffs at his circumstances, insisting that he had predicted it from “miles away.” But midway into the film, the former salesman discovers Elliot’s sexual subordination.

Though for a story that examines addiction and one man’s search for happiness at the end of a beer can, a night’s rest and some Valium are hardly enough to influence drastic change. Rush (who also penned the script) underestimates the severity of his own character’s demons, and without explanation abandons his deliberate pace in the film’s second act, resulting in a rise that comes too abruptly. Such shoddy development would have no place in the quiet Euro-dramas that the director tries to evoke. Fortunately, the production benefits from a stellar cast.

Ferrell lends an unusually restrained performance. Gone is the physical comedy from his earlier works and replaced by quiescent self-deprecation, the actor plays the saddest breed of alcoholic: A man that is not necessarily violent or outspoken during his drunkenness but rather someone who uses the booze to quietly (and momentarily) tranquilize his troubles. Essentially, Halsey is a hit-or-miss character — a role dependent on who fills it. However, as luck may have it, the casting is spot-on. Hall, Wallace, (son of the late rapper Notorious B.I.G.) and Ferrell all have excellent chemistry, allowing for inspirational (and a bit unrealistic) friendships.

Carver derived the concept for “Why Don’t You Dance?” from his own fall to alcoholism (which he eventually overcame). Rush’s adaptation — a modest first film — does little to improve on the story. Luckily, slick leads and ample doses of dark humor make Everything Must Go a decent indie-flick . . . even if the emotional payoff rests on the cheap side.

'Movie Review: Everything Must Go (2010)' has no comments 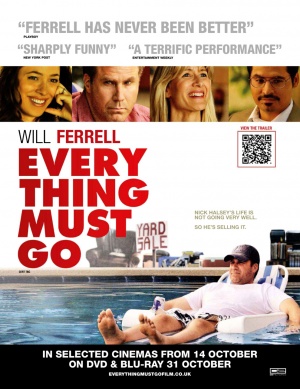