There’s been a renewed interest in the Church of Scientology and that’s probably because of the commercial success of HBO’s “Going Clear: Scientology and the Prison of Belief” and A&E’s “Leah Remini: Scientology and the Aftermath” television series (there are a few other documentaries on the topic, but they mostly regurgitate the same talking points). But basically if you’re still unaware as to what Scientology is, the religion was started in the 1950’s by fiction writer L. Ron Hubbard, who preached that aliens are responsible for our personal shortcomings. He amassed a following by penning the self-help book Dianetics, which has become the faith’s canonical text. After Hubbard’s death, the movement was taken over by a supposedly violent acolyte named David Miscavige, whose wife, incidentally, has been infamously missing since 2007. Yet despite being shrouded in mystery, the Church of Scientology has established corporate entities all over the globe with many Hollywood elites — including Tom Cruise and John Travolta — enlisted as members.

Outsiders get very little access into the Church. Information about its inner workings are acquired from the same handful of critics, all of whom are former members. My Scientology Movie, which is directed by John Dower and stars British broadcaster Louis Theroux, tries to be original by using the unconventional narrative arc of having fresh-faced actors recreating first-hand accounts of ex-Scientologists. Dower and Theroux’s approach playfully satirizes the Church’s Tinseltown presence, but it unfortunately has very little substance.

You should rather expect plenty of cringe-inducing scenes where aspiring thespians line up for a chance to showcase their talents (or lack thereof). That constant on-screen auditioning hardly pays off since the filmmakers only end showing one truly fleshed out re-enactment. To actor Andrew Perez’s credit, he takes that opportunity to shine in the role as Miscavige. Regrettably, his talent is overshadowed by how bad the other scripted moments are. They look like clips from a student film and have no journalistic purpose since their source material (such as Tom Cruise’s Scientology ad) is easily available on YouTube.

The rest of My Scientology Movie has Theroux driving around and getting the cops called on him. While it’s questionable how Scientologists stalk, bully, and try to get their detractors arrested, that’s already been documented online. Furthermore, insiders like Marty Rathbun, who was once a senior member of the organization before becoming one of its biggest opponents, is surprisingly tight-lipped in this film. Rathbun doesn’t even open up to Theroux after having his family threatened by a crowd of Scientologist goons. He just walks off-screen, ranting and raving about how “they’ll rue the day they brought [his] kids into this,” which Theroux simply shrugs off. The credits roll a few minutes later.

I imagine that Dower and Theroux were interested in the idea of making a film about the Church, but then, mid-production, realized there’s not much to say about it as a third-party. If you’re actually interested in learning about the organization’s cult-ish behavior, then I’d recommend instead listening to Joe Rogan’s three hour podcast with Leah Remini, “The King of Queens” star and former Scientologist. Unlike Theroux, Rogan actually presses Remini into revealing some pretty fascinating details, such as how members like Tom Cruise and John Travolta are so high up the ranks that they have people on call who’d literally take the fall if either of them committed murder. Remini also describes some of their day-to-day religious practices and gives her theories as to what happened to Miscavige’s wife. Rogan’s podcast, in contrast, makes My Scientology Movie feel like a vanity project that’s 99% filler. 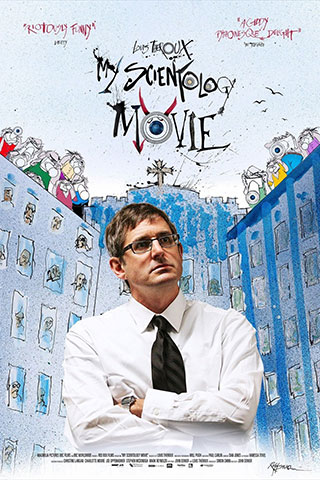