A woman (Diana Agostini, “The Eyes of Van Gogh”) looks out the window of her remote hillside home. A strange man (Will Brill, “Girls Against Boys”) is talking to her young daughter, who was playing in the garden. She goes out to investigate. He gives her a too-bright smile and asks when her husband will be back. She responds that it’ll be any second, but they don’t want whatever he’s selling. Another flash of that sinister smile. He asks if he can at least use the bathroom. She doesn’t want this man in her house, but can’t think how to refuse such a simple request. She lets him in, and soon meets a brutal end.

And so begins the litany of horror at the center of The Eyes of My Mother. Focusing on Francisca (Kika Magalhaes, “City of Gold”) the daughter of the doomed woman, the film explores the worst possibilities of what can happen to the isolated and lonely. Magalhaes plays the grown Francisca with a chilling, dead-eyed emptiness; most of her interactions with people are devoid of emotion. She is blank, a void, a husk. It’s a beautifully underplayed performance.

The film is understated in almost every way. It’s shot in a crisp, detached black and white. Close-ups are rare, and many scenes are shot from above, or at an extreme distance. There are very few words spoken. Music, when played, is used sparingly; it’s the silence and those terrible noises that humans make when they’re at their most desperate that have the biggest impact here.

Though The Eyes of My Mother depicts sickening violence, even in this regard, the film largely keeps a clinical distance. Most of the murders take place off screen, or far away. Sometimes we get a flash of the attack through a doorway or a window, at other times it cuts straight from the build-up to the gruesome results. And the results are gruesome. As the film enters its final stretch, we spend more time with someone who’s been at the wrong end of Francisca’s “affection.” I consider myself quite strong of stomach when it comes to horror movies, but there were times I had to look away and cover my ears.

Most horror films these days are rife with jump scares; Film critics Mark Kermode refers to them as “Quiet . . . Quiet . . . BANG!” moments. Whilst they have become a cliché, they do serve a valuable purpose in relieving the built-up tension. There are no jump scares in The Eyes Of My Mother, however. Wunderkind director Nicolas Pesce, just 27 years old, manipulates the tension with an expert hand. Whenever Francisca comes in contact with someone, you know how it’s going to end. But Pesce slowly, malevolently prolongs the action until the build-up to that inescapable violence becomes excruciating.

Though it is little more than 60 minutes in length, by the time The Eyes of My Mother had finished, I felt exhausted; like I’d run a marathon or narrowly avoided drowning. It left my stomach aching and my mind racing. There’s no question that this is a well made, terrifying film, but whether you want to subject your self to the physical after-effects is another matter entirely. You have been warned. 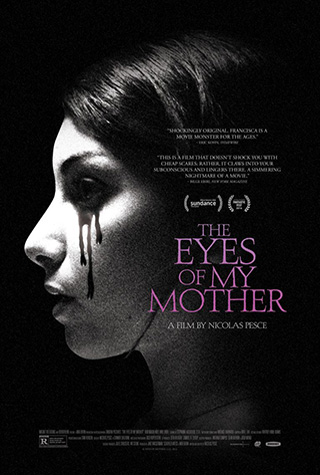