In 2002, we were introduced to the rage virus in “28 Days Later….” At the end of the movie we were made to assume that all will be well after mainland Britain was quarantined. But guess what? The rage is back in 28 Weeks Later and it’s badder than ever.

28 Weeks Later starts with a rude kick to the nuts. We’re transported back to the outbreak and follow another band of survivors in which Don (Robert Carlyle) and his wife Alice (Catherine McCormack) are a part of. After a quiet start to the day, their world is torn apart when the zombies break into their cottage and decimate their numbers. Fast forward 28 weeks in the future and Don is now a widower and a man in charge of provisioning in the “Green Zone” waiting for his children to arrive. Upon arrival the story begins . . .

Whereas the first movie depicted the initial outbreak and the plight of a few survivors within the city during the first 28 days, 28 Weeks Later provides to us the insight of the rebuilding process since getting control of the city. Since the majority of the inhabitants are dead, the city is broken into sectors and are in various stages of disinfection. A single sector, heavily guarded by the U.S. military, is deemed completely clear and is slowly being repopulated with people displaced by the outbreak.

There are a few things that set 28 Weeks Later apart, at least initially, from other zombie infested, horror movies is the focus on the survivors. The first half of the movie deals with life, loss and coming to grips with moving on. Don had to do some very questionable things to ensure his survival and must somehow explain this reality to his children. His children Tammy (Imogen Poots) and Andy (Mackintosh Muggleton) must learn to deal with the loss of their mother and the bleak future they’re presented with. Even the military snipers have their demons to face when and if they would ever get to stage three of a Code Red. Can the father live with his guilt? Can the children carry on without saying goodbye to their mother and not even having anything to remember her with? Will the snipers have a moral dilemma when confronted with the prospect of killing innocent people?

These questions and more are answered in relatively quick fashion, when the children sneak away into the city to find themselves a keepsake from their home. They inadvertently come into contact with a survivor with a secret — a secret that may change the course of survival. From there the movie reverts to a survival story again when it’s realized the U.S. barrier may be able to keep the infected out but can it withstand an infection from within?

In another attempt to segregate 28 Weeks Later from the others, the director (Juan Carlos Fresnadillo) decided to capture important aspects of the movie from great perspectives. The crowd dispersing into the city being captured from the sniper positions on the rooftop is exceptional. It lends fantastically to the frantic, out of control nature of the moment. The escape through the pitch black tunnels, shot partially through the night vision lens of a sniper rifle, compounds the feelings of fear and dread undoubtedly coursing through the veins of the runaways. The use of helicopter blades as a weapon, shot from the pilot’s vantage point, adds to the desperation. And without a doubt, the sweeping shots of London deserted and desolate is unnerving and eerie.

I can emphatically recommend 28 Weeks Later for your viewing pleasure. It starts slowly and hooks you by initially portraying itself as a psychological thriller which forces you to think about your own decisions in light of those being made in the movie. And just when you’re starting to crave some action, the movie jumps starts into a blood soaked, run for your life horror flick. It’s the best of both worlds for the price of a single admission ticket. The deal can’t be beat. 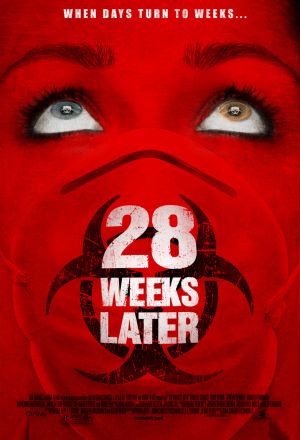