Finales of this magnitude usually come about once every few years for television shows, but very rarely for feature films. However, this is most certainly the case for the epic conclusion to the “Harry Potter” series, filled with equal parts fan-servicing closure and genuinely emotive scenes for those less devout followers like myself. Personally, Harry Potter and the Deathly Hallows Part 2 falls short of being the ultimate achievement in filmmaking it would’ve aspired to, but that does not mean it wasn’t an exciting and overly engaging movie from start to finish.

Harry Potter and the Deathly Hallows Part 2 picks up right where “Harry Potter and the Deathly Hallows Part 1” left off, with Lord Voldemort (Ralph Fiennes) celebrating his theft of the Elder Wand from Dumbledore’s tomb. It then cuts to, and stays with, our three heroes Harry (Daniel Radcliffe), Hermione (Emma Watson) and Ron (Rupert Grint), as they adventure out to seek out to destroy the last remaining Horcruxes: A collection of rare items and the only things keeping Voldemort alive. It culminates with the climactic battle between good and evil, where we learn the all-important secrets surrounding Harry, Voldemort, Severus Snape (Alan Rickman) and other key players in the Potter universe.

In fact, one aspect that Harry Potter and the Deathly Hallows Part 2 conveys better than any other seven films in the series is the hero-villain relationship. It only makes sense that a film that has had so much time to flesh out its characters should develop some sort of key bond between the two rivals; one that goes beyond the stereotypical battle of good versus bad. I likened the situation to that of the “Star Wars” saga — we know exactly what the respective hero and villain stand for, and yet they are more alike than perhaps either of them even want to acknowledge. (My apologies if this sounds a little cloudy, but I risk getting blown to bits in a minefield of spoilers if I keep rambling on).

I love to see filmmakers taking steps to initiate innovation in directing, and David Yates must be accordingly credited with presenting a unique plot structure. Rather than possessing a clear beginning, middle and end, this movie starts off with a short introduction and a set piece at Gringotts Bank (where a Horcrux is hidden). From there, the next ninety minutes play out as one enormous set piece inside Hogwarts, combining the fight for the school, search for the remaining Horcruxes and Harry’s date with destiny into a grandiose visual spectacle.

But that doesn’t mean the film lacks substance when it’s needed. Granted, I felt little sympathy for most secondary characters that were lost, but Harry’s delving into Snape’s memories (revealing the true colors of his character) is arguably the strongest and most poignant scene of the film. Coupled with Harry’s vision of his dead parents before facing Voldemort in the final act, the greatest achievement of these scenes is that they evoked sympathy from someone who did not expect to become so emotionally attached to any character.

The film does temporarily fall into the trap of playing out like a video game considering the task of moving from one Horcrux to another: Items that are nothing more than MacGuffins at their most basic level (see: “Sucker Punch“). This can detract from the pacing at some points, especially since the film tends to intercut between the revelations of Harry’s past, and his friends’ efforts to destroy the items which, by comparison, seem far less integral to the plot.

Script-wise, Harry Potter and the Deathly Hallows Part 2 treads water, delivering a decent screenplay that dosen’t exactly stretch one’s imagination. It can become rather stale (after a while everything becomes “brilliant” this or “bloody hell” that) but overall it isn’t a huge concern. What was disappointing, though, was the cheesy “nineteen years later” epilogue. Aside from the obvious fact that no-one looks as if they’ve aged a day, it serves no real purpose in the film, and does nothing to dilute my general hatred of tacked-on “and then this happened” scenes to close out a movie. Still, this finale is a solid effort, and a fitting end to a very imaginative series. 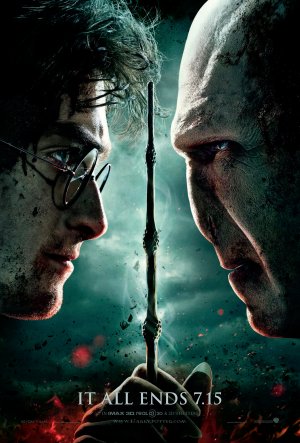