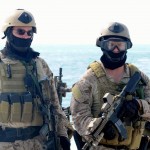 Releasing a mindless war movie under the precedent that it’s “like no other in Hollywood’s history” was not the right way to convey reverence for our troops. While Mike McCoy and Scott Waugh’s Act of Valor shows respect for the men and women in uniform overseas, it ignores the complexities of their situation. Once intended as recruitment cinema, it’s since been dressed in onscreen drama; this thriller is now one of the few with the audacity to depict dozens of burning schoolchildren — the aftermath of a car bombing meant to assassinate a U.S. Ambassador (played by Marc Margulies) — in its opening scene. It constantly uses such provocative phrases like “fatherhood” and “life or death situation” to do what the wooden characters can’t: Manipulate an emotional response from the audience.

Written by Kurt Johnstad, Act of Valor follows a troupe of soldiers during two intertwining missions. One is to retrieve CIA Operative Lisa Morales (Roselyn Sanchez) who, after uncovering a link between the aforementioned attack and a powerful smuggler named Christo (Alex Veadov), is captured and held prisoner by his enforcers. The other follows the soldiers’ attempts to stop an international terrorist named Abu Shabal (Jason Cottle) and his clan of suicide bombers from entering the United States. Both storylines are glued together by the reoccurring presence of Chief Dave and Lt. Rorke, who was forced to leave his pregnant wife (played by Ailsa Marshall) home alone.

It’s impossible to credit the chief protagonists as they’re played by active duty soldiers and for their protection, much of the cast remains anonymous (many of the characters they portray are also without names). I can, however, discredit the filmmakers for this choice. Because they were against using professional actors for so much of the cast, the performances suffer. And, unfortunately, this stiff acting, when combined with a clichéd narrative and overdramatic dialogue, makes even hard-hitting themes like death and mourning hard to care about.

As for the storytelling, aside from being clichéd, it is heavily draped in patriotism — its purpose is seemingly to focus solely on how glorious and unflawed the American army is. The antagonists are given no sense of humanity or character. Nevertheless, while they have no purpose but to destroy, the aggressors are a decent change of pace for the cast of mannequins and meatheads. Cottle, especially, delivers as a rebel incendiary and injects much needed energy to the drama. 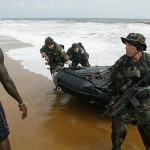 It once was a serene beach.

In its defense, the documentary-esque directorial style the movie is captured with works in conjunction with how silent a lot of the action is. McCoy and Waugh also employ, to a great extent with reasonable results, first-person shots and close-ups to exaggerate the tight quarters the soldiers fight through. It should be no surprise too that more than a fair share of queasy-cam shots play a role in the combat. While this technique quickly becomes cumbersome, these sequences are easily the best the movie has to offer.

I went into Act of Valor disregarding any political affiliations, looking solely at the cinematics. However, this is a movie where personal ideals often reflect the experience. To me, scenes of emotional honesty — like a late in the movie military funeral — are overshadowed by violence (which, to my understanding, was shot using live ammunition). So, ironically, while I ripped apart the new hippie-comedy “Wanderlust,” a commune of druggies and peace activists seems more like a home for this film critic. 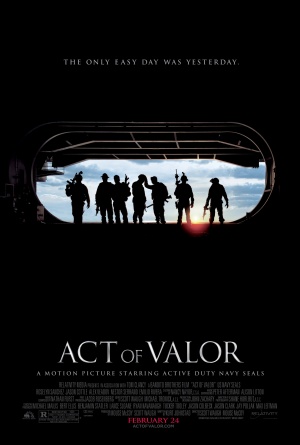