The survival and rescue of a group of Chileans trapped in a gold mine in 2010 is certainly a compelling enough story for the big screen, unfortunately, it’s the telling of this tale that falls short in The 33, the newest Warner Bros. release directed by Patricia Riggen (“Girl in Progress”). Just the title alone presents writers Mikko Alanne (“5 Days of War”), Michael Thomas (“The Devil’s Double”) and Craig Borten (“Dallas Buyers Club”) with an oppressive enough hill to climb. If there were five, six or even seven miners trapped, instead of 33, we could get much better character development and backstory, things we do not see in this picture. Here, only a few of the men are featured, while the others exist as simple background entities.

A documentary on the disaster and ultimate triumph probably would have served so much better as the only real emotional moment of this film comes at the end when we meet the real miners anyway. Another angle which could have been more explored was what happened after the rescue when the obviously greedy, uncaring and callous mine owners were found not guilty of negligence and the men were never compensated for their ordeal. Instead, we get this version — taking nothing away from what the survivors went through — which reads like almost every other people in peril for two hours then saved script.

I will write, however, the viewer should beware: What “The Walk” did for acrophobics, The 33 does for for those with claustrophobia. Although that does not make the latter a more intriguing or interesting journey in any way. It’s a great story with a wonderful conclusion, but just a so-so film, sad to say.

Based on Hector Tobar’s book, “Deep Down Dark,” what audiences are treated to is a two-hour look at the 69 days (the first 17 when they run out of food and water are the most harrowing, though) those mine workers endured after the San Jose Mine collapsed. Their story is one that captured the attention of the entire world. Yes, for a week, the global community held its breath in unison while, daily, millions tuned in to await the outcome. Nothing like that harmony is likely to be reproduced during this production.

Riggen does the best she can, but the most recognizable faces include French actress Juliette Binoche (Academy Award winner for “The English Patient”), Irishman Gabriel Byrne (“Vampire Academy,” although best known for his role in “The Usual Suspects”) and gringos James Brolin (“The Goods: Live Hard, Sell Hard”) and Bob Gunton (“Argo” and the warden in “The Shawshank Redemption”). The last actor is hilariously miscast playing the Chilean president at the time and is about as Hispanic as Vladimir Putin.

Of those trapped underground, Antonio Banderas (“The Expendables 3”) as team leader Mario Sepúlveda, and Lou Diamond Phillips (famous for his role of Ritchie Valens in “La Bamba”) as safety manager Don Lucho, respectively, come to the forefront. These are the only real miners who get any screen time, although Yonni Barrios (Oscar Nuñez, “The Office” TV series) does get the comedy relief crown as the goofy guy with two women (a wife and a mistress next door) publicly fighting over him.

Mario became an international superstar as the public face of the trapped miners. He’s bold, brave and a natural leader, while Lucho is his supervisor but too passive and panicked to take charge of the situation. There is also a drug addicted miner who freaks out and a calm and caring pastor, an Elvis impersonator, an expectant father, a put-upon Bolivian and an old guy who looks like “The Most Interesting Man In the World” gone very bad, but no one else has enough of a personality to write bout.

With scenes in the dank mine interspersed with those of the Chilean government and international rescue teams, along with the frantic family and friends above ground, The 33 is often compelling and sometimes heart-string tugging, but is ultimately too predictable. And the sheer number of characters overwhelms the fragile script, much like the crumbling mountain which threatened to entomb the miners. 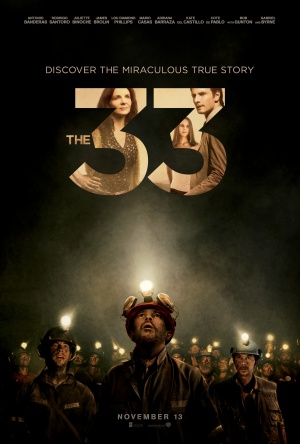