Preconceived notions are like mother nature — a bitch. Especially to someone who likens themselves to an unbiased critic. So with a heavy heart, I admit, I went into the theater to see Bridge to Terabithia thinking it was going to be a weak runner-up to “The Chronicles of Narnia: The Lion, the Witch and the Wardrobe.” After all, the trailers and print ads all show children in a fantasy land in the midst of fantastic creatures. What would you expect?

Happily, I can say that Bridge to Terabithia is nothing of the sort. The similarities end with the fact that both movies are book adaptations. Where the world of Narnia is in fact a world within the real world, the world of Terabithia is purely imagination. It is a place where a young boy, Jesse (Josh Hutcherson) and a young girl, Leslie (AnnaSophia Robb) go to escape real world conflicts and to develop solutions to those same said problems. It is here where a lost boy ultimately discovers who he is.

For the story to work as well as it does, it was critical to cast capable young actors and actresses. That’s because the adult parts play very little into the scheme of the movie — they’re there more as a backdrop — Robert Patrick as the father of Jesse (seen originally as a bad entity) and Zooey Deschanel, as their music class teacher Ms. Edmonds (seen originally as a good entity) are played well enough to not ruin anything. The real story is told from the interactions among the kids at school and at home. Josh Hutcherson plays the pivotal role of Jesse convincingly. You can clearly see the trouble he is having adjusting and fitting in at school and at home. His cries for acceptance fall on deaf ears by all within earshot. The crime of it all is most of his problems could be solved if he just received the love from his father that he is craving. AnnaSophia Robb plays the wide-eyed, imaginative friend Jesse has never had. Her belief that everything can be solved and there is good in everyone are uplifting messages. Without her guidance and friendship, Jesse would be lost forever.

The lone drawback of Bridge to Terabithia is it is fifteen minutes to long. Literally. The movie should have ended shortly after the semi-unexpected plot twist. Instead, we’re mired in additional story telling that causes the movie to drag to a halt. The only thing we needed in this footage was the reconciliation between father and son. The movie would have ended perfectly there.

All told, this is a great story to watch unfold. As a parent, you can gain insights into how not to treat your children. Your kids need you — be there for them. As a teenager, Bridge to Terabithia sends the message that even outsiders can escape temporarily from everyday hassles and that in the end it is okay to be different. Some of our greatest minds were those picked on in school, so hang in there . . . 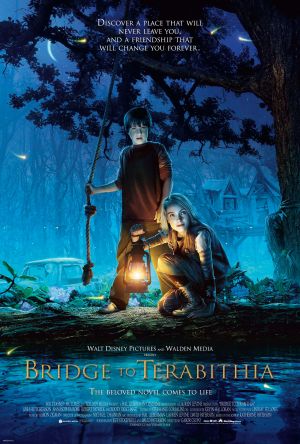