How many of us have wanted to drop everything on our plates and head out into the sunset, into the unknown, without a care in the world? I for one have — hell I’ve actually done it (when I was much much younger) and recommend everyone give it a try. It definitely replenishes the tank. Based off this typical middle-aged angst, Hollywood puts into our laps: Wild Hogs.

Wild Hogs starts by introducing us to four best friends who each in their own way are lost and down on their luck. There is Doug (Tim Allen) a dentist who is defined as a suburbanite now by his friends and family. Bobby (Martin Lawrence) is henpecked husband with a shit job and no respect. Dudley (William H. Macy) is a self professed computer dork with the people skills of a neanderthal. Finally there is Woody (John Travolta), a guy who seemingly has it all — a hot wife and big cash — but in reality doesn’t even have a pot to piss in anymore. These four wannabe bikers head off to California for the typical trip to self discovery that we’ve seen thousands of times.

But you know what? Walt Becker, the director, pulls it off. I initially got a bad taste in my mouth when I thought of these has-been actors all sharing screen time together. Surely, they would all ape for the camera and the film would be a complete disaster. But that’s simply not the case. The writers have clearly gone out of their way to provide equal screen time to the quadruplets. Each has their individual comedic moments and when sharing screen time, none try to overtake the other. The only over-actor in the movie was Ray Liotta as Jack, the leader of the outlaw bike gang Del Fuegos.

As for the movie itself, the comic scenes are clearly staged and the payoff isn’t much of a surprise. While the guys are bathing in a spring naked you expect a family of five to join them. When they decide to smack a bull on the ass, you expect the bull to get the last laugh. As for the more serious natured scenes they are for the most part outrageously ridiculous. What would you expect if four part-time Harley riders enter an outlaw biker bar wearing some silly colors? Rest assured they won’t get offered cookies and milk. How about these same individuals standing up to fight an entire chapter of outlaws? That’s right folks, they would never live to tell about it — I’ve never met a biker who didn’t at least carry a blade with him.

Yet even with the need to suspend belief and common sense, Wild Hogs is still a fucking funny movie. Even though I knew something was going to happen, I laughed out loud when it did. Hell, the entire theater laughed out loud. And time after time the biggest laughs came from William H. Macy. His complete nerdiness and deadpan delivery were a perfect fit for this movie. Who knew he had this comedic talent hidden beneath the surface (I certainly didn’t).

Without a doubt ensemble casts in comedies usually fail miserably. Just look at “Ishtar” and “Three Amigos” as examples of what can go wrong. Luckily, Wild Hogs avoids many of the pitfalls of similar movies because it doesn’t take itself too seriously. It is this carefree attitude that makes it work. Just remember that when you decide to take a midlife road trip that: 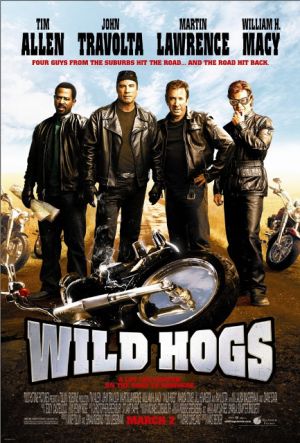