It’s been awhile since I’ve seen my favorite guy with a rubber face, Jim Carrey. He’s been keeping a low profile all the while tapping the ass of that hottie Jenny McCarthy. Lucky fucker. So as I was saying before I began salivating over McCarthy’s pristine ass like Pavlov’s dog, it is a good thing to see Mr. Carrey once again gracing the silver screen. Once again, breaking away from his funny man routine, he returns in The Number 23.

The Number 23 is a psychological thriller, in which a seemingly normal family man, Walter Sparrow (Carrey), becomes obsessed with a diary of sorts that delves into the number 23. This number ultimately destroys the writer’s life and slowly begins to drive Sparrow away from his family and into madness as he tries to understand the tale laid out before him. Did you understand that? I couldn’t figure out what the fuck I was writing, so I won’t be upset if that made little sense. Not only was that quite confusing to write (and read), it was just as difficult to watch on the screen.

Part of the problem was the story is so disjointed. One second you are following along a clue in the present, only to be transported back in time to a scene from the book that doesn’t seem to have any relationship. The relationships to most of these flashbacks/recounts don’t get explained until the end of the movie (as expected) but I found the fragmented nature of the storytelling to be more trouble than it was worth. Perhaps it was the fact that everyone in the movie played multiple characters. Or maybe it is because I tend to get autistic with movies like this – I was equally confused by “Memento” and “Eternal Sunshine of the Spotless Mind.” Either way, I found myself trying to figure out what the fuck I just watched and more importantly which characters were involved. Not good unless you purposely want to lose half the audience. The other issue I had, was with the style of filming. In an effort to increase the thrill and the immediacy of the moment, the director (Joel Schumacher) went to playing with lights and shadows. This noir style has it’s benefits if used properly, but to me it seemed as though it was used as a last minute effort to delineate between the “real” world and scenes from the book.

That’s not to say that the movie wasn’t interesting. I had no clue the number 23 had such deep connotations associated with it. I knew about 13 and 666, among others but never was 23 lumped into the mystical realm. And now that I think about it, my birthday is on the 23rd . . . I’m fucked! The casting directors did well by me by casting the role of Agatha Sparrow (Virginia Madsen) and Laura Tollins (Rhona Mitra). For an old chicken Madsen still looks edible. Who knew she had a tight little body like that? And I’ve been infatuated with Mitra since her brief stint on “The Practice.”

For a thriller, The Number 23 comes up a bit short. It’s an interesting story, but the interest wanes relatively quickly and you’re left wondering two things; When will this movie end and when will the sex tape between Jim Carrey and Jenny McCarthy get leaked on the internet. In both cases the answer was sooner than later. 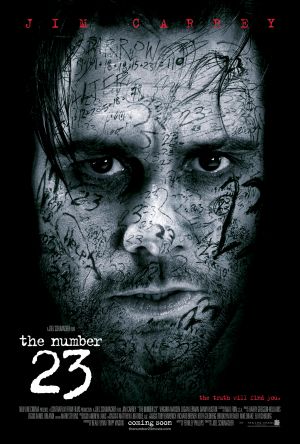