You know when you love the idea of something, but tend to be disappointed by the way that idea is put into practice? That’s how I feel about found-footage films. “The Blair Witch Project” perfectly exemplified the genre; since then, more or less, I believe it has gone downhill. In many such movies, I find that either it is unclear why anyone is still filming (certain parts of “Cloverfield”), or that the found-footage aspect of a film is by far its most compelling element (“The Sacrament,” certain vignettes in the “VHS” movies). Overall, albeit ironically, due to the fact that people in traumatic situations in real life are more capable and likely to film their ordeals now than ever (which one would assume could open the gates for myriad plausible plots to be shot in this style), the genre feels tired, rarely achieving its intended effect.

Enter Default, one of the most justified uses of the found-footage technique that I have seen in a long time. Opening with an eerily realistic news story detailing the aftermath of a Somali pirate hijacking that has ended with the torture and murder of eleven civilians, Default chronicles the harrowing events that transpire when the privately chartered plane of a travel news team is overtaken by a Somali terror force. Their leader, a man who calls himself Atlas, demands that the team position their cameras throughout the cabin of the plane and interview him about what he’s trying to do. What follows is an indictment of orientalist conceptions of the relativity of fear and the motives behind the hostage-taking agents of terror that so frequently populate our news cycle today.

Already, the hyper realistic opening, combined with Atlas’ instructions, justify the use of the found-footage technique to tell this story. All of the necessary conventions thereof are also neatly addressed: Early on, following a practical joke that effectively characterizes Frank Saltzman, a once hard hitting journalist who now bitterly goes through the motions of the fluff pieces to which he is assigned, one member of the news team tells another to stop recording. Immediately after Atlas and his men board the team’s plane, he tells them where to position the cameras and demands that if he is interviewed and the resulting footage is displayed on their network, ANC, later that night, they will all be released unharmed. Later on, Default even remembers to include some obligatory shots through a blood spattered lens.

In some ways, Default comes across as a morality play. Atlas tells Frank early on that their forced interview is his response to ANC’s coverage of the attack that opens the film; in particular, the way its handling of the story has condemned a sixteen year old boy currently on trial for the murders. Atlas wants the Western world to re-evaluate the way they use the word “terrorist,” and understand the motivations of those who are forced into that role. “The media reserves the word ‘terrorist’ for Arabs,” Atlas says, “what does the Middle East have that Somalia doesn’t?” Frank promptly engages Atlas (almost too willingly) in a transparent philosophical discussion, explaining that the moniker “terrorist” implies ideological motivations, rather than just the desire for an appeasing pay out. What follows, as Atlas and Frank together interview the rest of the crew to satisfy a terrifying wager between them, is an exploration of whether or not motivation makes a difference once a group of people boards a plane and claims to have a bomb.

The responses of Frank’s crew to Atlas’ threats vary only slightly. “Fear is fear,” as Atlas posits, tends to be the general consensus. “I can rely on money to come and save us, but I’m not sure about God,” is one particularly striking answer offered by a member of the crew. “It’s the same end result,” another says. What difference does it make?

In addition to pitting religion against ransom, Atlas gives Frank a very real taste of the tactics used to coerce boys like the one on trial into carrying out terrifying acts. The importance of this point is underscored by the fact that Atlas’ people have brought their own cameras, to film a training video, and along with them a young boy anxiously carrying out his first attack. Ironically for Atlas, yet ostensibly intentionally for the filmmakers, by bringing the young boy on board to make his point, he is still perpetuating the same cycle of violence that he is railing against. If this is intentional, bravo. If not, this choice is, for me, the same as Frank’s unfailing arrogance throughout the film; a device used to further the story that, although it could have been, is not clearly justified.

Ultimately, despite its flaws (transparent dialogue, archetypal characters) I really enjoyed Default. Its moral and motivational experimentation even calls to mind, at times, cult classics like the 2006 anime series “Death Note” and the “Scream” movies. At times I was even reminded of the terrorist-as-teacher trope most recently toyed with in “Iron Man 3.” Aside from the ending, which I think I understand the intention of (and won’t spoil here) but still wish had remained on track, Default is definitely worth a watch, if only to challenge one’s own conceptions of terrorism and the inhumanely salacious way the media responds to these kind of threats. 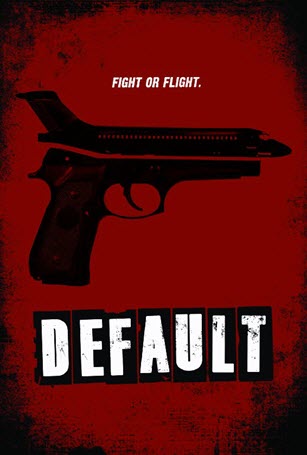