The problems with Rave Party Massacre begin — but certainly do not end — with its title. For a film that purports to portray a “massacre,” the body count by the time the credits roll is alarmingly small. What makes this titular inconsistency especially strange is the fact that the film actually does deliver on its other two eponymous promises. This is to say, the rave party we open with is rife with potential victims (and drug dispensing predators) yet they, along with anything potentially promised by what is a genuinely interesting initial set up, disappear inexplicably and, even taking the film’s bizarre pacing into account, early on, without any sort of explanation at all.

The party in question, we learn from a title card (more on that later, trust me), takes place three days after the presidential election of 1992, which also happens to be the birthday of one of the main characters (notice my intentional avoidance of terms like “final girl” or even “protagonist”), Rachel (Sara Bess, “Shay”). As Rachel rolls up to the venue of the rave with boyfriend Phillip (Evan Taylor Williams, “Remember the Goal”), the two have apparently been arguing about the latter’s obsession with conspiracy theories all night. According to the birthday girl, Phillip has already ruined dinner, and all she wants to do now is go inside, dance, and have a good time.

These first few minutes of Rave Party Massacre (including a literal two minute and thirty second title sequence which, again, we will get to) give viewers as much context regarding Rachel and Phillip as a couple, their individual motivations and personalities, the political climate of the time, who the villains or protagonists of the film are, why, who we should be rooting for, or any other establishing or clarifying detail as we ever get, and it really isn’t much.

Even taking into account the films’s one infuriating “twist” toward the end, aside from a horridly disturbing occurrence relayed in dramatic black and white flashback, it is unclear which of their sides we’re even expected to be on up until that point, or what those sides or the twist are even really supposed to mean. (Are we supposed to identify with Rachel, the long suffering girlfriend of someone slowly losing their mind, or with Phillip, the newly enlightened red pill aficionado desperate to tear the wool away from her benighted party girl eyes?)

On top of that, we never see Rachel and Phillip even pretending to like each other or get along. Their coupling in and of itself seems as forced and odd as the choice to portray the contrast between their bifurcating interests by having the two of them literally switch the car radio back and forth on their way to the rave between some generic techno song and a news report about the egregious tragedy at Ruby Ridge.

What literally happens once they get to the party is that Rachel storms in as Phillip beseeches her not to and parks the car. In no time at all, we find her dancing by herself, unquestioningly consuming illicit drugs placed on her tongue by one stranger (wearing a chihuahua mask, for some reason), and having sex with another (Pedro Ferreira). While cheating on your boyfriend while he is literally in the process of walking toward where you’re standing isn’t generally the most defensible behavior, it is one of the only things Rachel does that, given the limited information about her that we have, actually makes sense. It’s her birthday. Her boyfriend is at best a little weird and a lot obsessive and at worst, someone with a legitimately dangerous mind. He already ruined dinner and she will not let him continue to ruin her night. Maybe she doesn’t want anything to do with him at all anymore. Maybe this will be Rachel’s story, and we’ll see her seek out a sense of peace and understanding of her universe, a combination of partying and paying attention without ever giving in too strongly to the excesses of each, kicking bloody rave ass all the way to a triumphant conclusion about society and individuality and breaking out of different types of patterns and relationships and political and social cages one once aligned themselves with. Maybe that would’ve been fun to watch. Unfortunately, we’ll never know.

Instead, Phillip comes into the party after Rachel, says he’s going to get them water, and immediately cheats on her with the first girl (Melissa Kunnap, “The Righteous”) he sees. This is when the movie jumps ahead to . . . well . . . it doesn’t tell you exactly when. It’s the next morning, or several hours after the party starts, or something, and everyone at the rave aside from our original couple, the randoms they each most recently swapped spit with, and one other guy (Jared Sullivan) are gone. We learn this as we are shown each of them waking up in strange places around the building where the rave was held, but literally nothing else. Once awake, Rachel and Phillip separately align themselves with the people they hooked up with the night before, angrily abandoning each other and reacting very over dramatically when those people are in danger or hurt. This is the point where Rave Party Massacre completely loses it for me, and also the point at which I was able to figure out its biggest weakness — not the writing, pacing, stakes, or acting, but, rather, the direction.

See, while I don’t buy the existence of Rachel and Phillip’s relationship to begin with, what I buy even less is the idea that, waking up in a strange place, completely uncertain of what is going on and whether or not you will survive, anyone would immediately align themselves with a stranger instead of someone they actually know and with whom they have probably worked through many of life’s challenges, if none so severe, up until this point. That just isn’t a logical thing to do. That being said, tons of characters do tons of illogical things in tons of movies. What’s missing here is any reason for audiences to believe that this movie’s characters would do these illogical things. None of these actors seem to know what their or any of the other characters are doing, supposed to be doing, or want. A more solid script (much of it feels like redundant improvisation) and much more solid direction could have made a lot of these problems go away.

The worst parts about watching Rave Party Massacre, though, are how genuinely interesting what I assume was once a key part of the premise is, and its attempt to occupy several specific subgenres at once. In addition to clearly being a B-grade horror movie, through and through, Rave Party Massacre initially sets itself up not only as a political/conspiracy drama, but also a historic one. Rarely does horror, a genre somehow simultaneously unendingly complex and more necessarily formulaic in its beats than almost any other (looking at you, romantic comedies), attempt to combine with other conceits. Sometimes, these combinations knock it out of the park (“The Witch,” “Tucker and Dale vs. Evil”); far more frequently, they swing and they miss. And now it’s finally time to talk about that title sequence.

There’s a video I recommend watching on the Cracked YouTube channel entitled “Why Cutting to the News is a Sure Sign of a Bad Movie.” In it, former Cracked contributor Michael Swaim illustrates just how many movies begin in this way while explaining how lazy a technique this is for writers to employ and how insulting it is for audiences to watch. Still, many of the examples pointed out use this tactic for world building rather than plot developing, and some (“Get Him to the Greek” in my opinion, for example) are still fun to watch.

Compare this to the way that Rave Party Massacre begins and ends. The aforementioned two minute and thirty second opening presents an extensive series of politically and emotionally charged images — illuminati symbols, drugs, weapons, newspaper headlines, and presidents — that, again, seem to imply that the massacre we’re about to see will be politically motivated in addition to interacting with the experiences of our two main characters. In actuality, we only even know the rave takes place in a hospital set to be demolished because those exact words appear in a headline we’re seen in the opening. And we only know the final body count because of a news report that plays over the credits at the end. Literally all of the exposition, all of it, and there still isn’t much, comes from the opening and closing credits. Watch what the first “Scream” movie does in its first two minutes and thirty seconds if you need proof that abundant organic exposition can be crafted and delivered in that amount of time. After all that, it is still unclear what any of this has to do with Bill Clinton or the “new world order” of George H.W. Bush, aside from suggesting that the ambiguous “deadthirsty” group behind this “attack” are railing against the idea of equality? I think?

So yeah. Somehow simultaneously blatant and amorphous exposition, poor pacing, bad dialogue, no point, unsubstantiated twists, an extremely unclear point of view, and many more factors make Rave Party Massacre defy comprehension. The best music happens early on at the rave, when Phillip is about to get water, the best shot is when Rachel wakes up in the morgue drawer, and the best detail is when she attempts to blow the whistle around her neck (a common and recognizable rave accessory) in an attempt to attract attention and help. Sara Bess is far and away the best actor in the film, but I still don’t know what her character wants or thinks at any point throughout, other than the fact that she does not want Phillip to ruin her night when it starts. I guess, in the end, I understand why Rachel hangs up the phone when 911 calls her back. If they ask what’s going on, what could she possibly say? 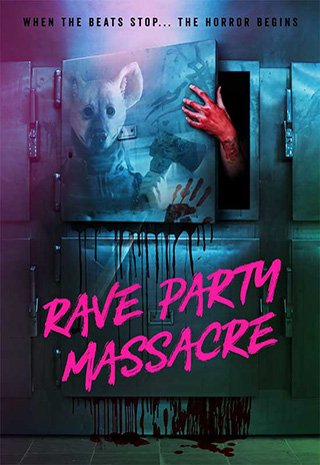