Not since “The Electric Horseman” in 1979 have we had the distinct pleasure of seeing two outstanding actors, Robert Redford (“All Is Lost”), now 81, and Jane Fonda (“Youth”), now 79, working together in the same film. That situation has now changed with the release of Our Souls at Night, directed by Ritesh Batra whose recent film “The Lunchbox” received much critical acclaim. Adapted by Scott Neustadter (“The Disaster Artist”) and Michael H. Weber (“The Spectacular Now”) from a novel by the late Kent Haruf, Our Souls at Night was shown at the Venice Film Festival then went directly to Netflix, a move that in today’s multi-layered media environment is not reflective of the film’s quality, but only its box office potential. Set in a fictional small town in Colorado close to the Rocky Mountains, two elderly neighbors, Louis Waters (Redford) and Addie Moore (Fonda) are widows whose days and nights are marked by loneliness.

When the taciturn Waters hears a knock on the door and opens it to find a nervous looking Addie whom he barely knows, he knows that something unusual is about to happen. After much hemming and hawing, Addie tells him that that her nights are very long and that she needs companionship, someone to converse with. Louis is surprised to say the least when she blurts out the question, “Would you be interested in coming over and sleeping with me?” Of course, as she explains, she means sleeping as in a “sleep-over” rather than sleeping as in — well — sleeping together. After a few minutes of interminable silence, he tells her that he needs time to think it over as if he is considering buying her wicker chair.

After his daily breakfast meeting with a group of fellow members of the “seen better days” club led by Dorlan Becker (Bruce Dern, “Nebraska”), he calls Addie to tell her that he has decided to come over that evening. Carrying pajamas and toothbrush in a paper bag like a child heading off to school, he stealthily makes his way to the back door and knocks quietly to make sure that no one in the gossipy town will have a subject to discuss. To say that their first night together was awkward is like saying that there are a few mountains in Colorado. With nothing to talk about except the weather (always a scintillating topic of conversation), the new friends quickly turn out their lights and turn over in bed, most likely thinking that maybe this was not such a good idea after all.

Things loosen up after a few nights, however, and they begin to share with each other some painful memories about past relationships and how it affected their children. Louis speaks of regrets about how he left his wife and daughter for an affair with a young teacher and the sadness of his wife’s last years fighting cancer. Addie reveals that her daughter was killed in an accident and how that changed her relationship with her son Gene (Matthias Schoenaerts, “Red Sparrow”). Since Louis’ circle of elderly agitators seem to already know what is going on, the two decide to throw caution to the wind and walk together in town openly, even going to lunch together at a nearby restaurant.

Once Gene and Louis’ daughter Holly (Judy Greer, “The 15:17 to Paris”) become involved, however, the drama intensifies. When Gene tells his mother that his wife has left him, he brings his seven-year-old son, Jamie (Iain Armitage, “Young Sheldon” TV series) to her house, asking that she look after him until his wife returns. Noticing that the boy is struggling, Louis takes him to a dog shelter where they pick out a dog that Jamie is attached to. Building a train set together, going to a baseball game, and going on a camping trip cements their relationship, but fate has a way of intervening.

Our Souls at Night is not a “chick flick” or a film that only those who are close to the end of life can appreciate. It is not only a perfect vehicle for Redford and Fonda but a film that will strike a responsive chord with anyone regardless of age who is ready to risk discovering what more life has to offer. 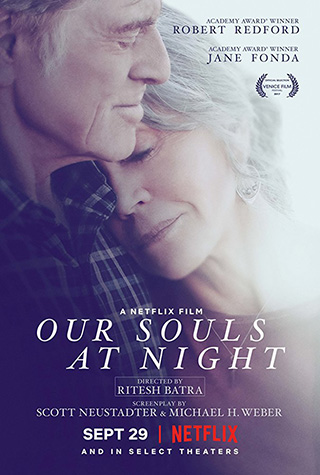