A common rite of passage for college seniors is their last Spring Break — they get together with friends in a tropical location for sun, drinks, and fun before they graduate and enter “the real world.” Intent on making her final Spring Break worth a little more, Olivia (Lucy Hale, “Scream 4”) has instead signed up to be a trip leader for Habitat for Humanity, and hopes her latest YouTube video will convince other students to follow her lead. When her best friend Markie (Violett Beane, “The Resident” TV series) reveals that she “unsigned up” Olivia to free her for a trip to Mexico, Olivia begrudgingly agrees to join her, with the condition that Markie and the rest of their friends volunteer two weeks of their summer to building houses for those in need.

In Mexico, Olivia, Markie, and their classmates live it up and have the time of their lives. On their final night, Olivia is saved from Ronnie (Sam Lerner, “Walk of Fame”) — a creep she knows from school — by Carter (Landon Liboiron, “Burning Bodhi”), a pseudo-knight in shining armor who suggests she’s too nice. He invites Olivia and her friends to a dilapidated church near the beach where they all engage in a game of Truth or Dare.

The typical game ensues, with Ronnie hoping for some girl-on-girl action and instead being dared to give Tyson (Nolan Gerard Funk, “Wildlike”) a lap dance. The girls challenge each other with secret-revealing Truths and one of the guys gets dared to run around the room naked. When he chooses Truth, Carter tells the group that he brought them there because he’s not above letting a bunch of strangers to die if it means he can live. As he runs from the room, he tells Olivia the game is very, very real, and if they don’t tell the truth, perform the dares, or play at all, they will die.

Unnerved by the whole experience, Olivia and her friends return to school, but Olivia discovers the words “Truth or Dare?” carved into her desk, scrawled on the back of a flyer, and she’s pressured into answering an uncomfortable Truth in the library. Gradually, they all discover the game has followed them back from Mexico, and though people around them are unaware of the game, they are forced to play or face very real consequences. After Ronnie refuses to comply with a dare, they search for a way to end the game and discover a dark supernatural force has been unleashed upon them.

Directed by Jeff Wadlow (“Kick-Ass 2”), Truth or Dare is a predictable and ridiculous horror film that feels more like a rejected “Final Destination” script than a fully-fleshed out idea. The story gets going quickly enough, wasting little time in establishing the initial Truth or Dare? game, but the subsequent challenges are laughably unfolded. Instead of any real suspense, the movie relies on trying to jolt the audience with the characters’ “shocking” deaths. Each character is more stereotypical than the last, and none of them are given any kind of depth, so whenever they die, it’s not at all frightening or disconcerting.

Every conversation between the cardboard cutouts is also contrived, serving no purpose other than to over-explain every lazy plot point Jillian Jacobs, Michael Reisz, Christopher Roach and Jeff Wadlow inexplicably drafted. Their interactions are forced and lackluster, including ridiculous fights that are meant to increase the tension, but instead they increase the volume of the groans heard from the audience. The dialogue is just as comically bad as you’d expect, with lines like: “We’re not playing [the game]; it’s playing us” and “We can’t change the past, but we can still have a future” and “Trust us, we’re telling the truth” and, yes, even “Try me — I dare you.”

Going into Truth or Dare I didn’t expect much, as the trailer for this PG-13 fare hinted it was aimed at younger viewers who are newer to the genre and easily surprised by the most basic of jump scares. While these movies can feel rushed and cheesy for those of us a little older than the age of 13, sometimes they offer an unexpected nugget or two, but Truth or Dare is just so plain insulting that I’m stunned it comes from the studio that brought us “Paranormal Activity,” “Sinister,” “The Purge” and the recently Oscar nominated “Get Out.”

The truth? Truth or Dare isn’t worth your money or your time. I dare you to find something more productive to do instead. 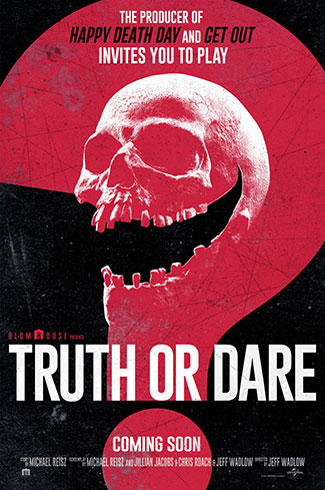