One night, on a quiet neighborhood street, a black man walks along, minding his business, trying to remember directions he was given. He mumbles to himself about street names and how “confusing and scary-ass” the suburbs are (true story). A white Porsche creeps up behind him, eventually pulling ahead of him to idle near the sidewalk. Once he realizes he’s being watched by this car, the man wisely decides to turn and walk in the other direction; unfortunately, he’s grabbed from behind and thrown into the car’s trunk.

So begins the whip-smart Get Out, the directorial debut of Jordan Peele (“Key and Peele” TV series). Immediately, the movie situates itself to be a self-aware film that fully intends on turning convention on its head. Clichéd stereotypes from horror and from society at large are addressed in many ways — some thoughtfully and subtly, and some simply hit you over the head like a bocce ball.

Chris (Daniel Kaluuya, “Sicario”) is a young photographer living in the city; his beautiful photos adorn every wall of his apartment, and it’s clear he’s very talented at his craft. His girlfriend, Rose (Allison Williams, “Girls” TV series), arrives bearing the gifts of donuts and coffee, ready for their trip to her parents’ house. Chris is a little nervous, and asks if her parents know he’s black; she shakes it off, assuring him that her parents aren’t racist. In fact, her father would’ve voted for Obama for a third term if he could — and he can be counted on to share that fact with Chris. She says it makes him a lame dad more than anything else.

Once they arrive at Rose’s upscale family home, her parents welcome Chris with many warm greetings. Dean (Bradley Whitford, “The Cabin in the Woods”) does, indeed, overdo it with his tour of the house and insistence that Obama is the best president of Dean’s lifetime. Missy (Catherine Keener, “The Oranges”) is more subdued; she’s thrilled her daughter is home to visit, and as a psychiatrist, she kindly offers hypnosis to help Chris quit smoking. In their room, Rose recognizes how awkward the visit has become, and admits to Chris that she was wrong. Chris reassures her that it’s not a big deal to him, but things get even stranger.

At dinner, Rose’s brother Jeremy (Caleb Landry Jones, “X-Men: First Class”) is combative and aggressive. The family servants, Georgina (Betty Gabriel, “The Purge: Election Year”) and Walter (Marcus Henderson, “Pete’s Dragon”), stare off into space before refocusing themselves back on their work. When Chris speaks with each of them, they reply with robotic answers that aren’t their own.

At the annual family party, Chris faces further uncomfortable conversations as the guests compliment his physique, ask embarrassing questions, and share that they’ve always liked Tiger Woods. At first, Chris is relieved to meet Logan (Lakeith Stanfield, “Short Term 12”), the only other black guest, but is taken aback when he also delivers canned responses. Fascinated by these unnerving encounters, Chris attempts to take a cell phone photograph of Logan, but the flash goes off, triggering a violent outburst. “Get out! Get out of here!” Logan shouts at Chris as he lunges for him. Incredibly, though, this is only the beginning, and Chris is faced even more horrible situations as the film continues.

Get Out is a journey to the dark underbelly of the suburbs that is sure to stay with you in a plethora of ways, and that’s the distinct intention. It’s a thriller that doesn’t disappoint, with uncomfortably intense smiling guests, a few jump scares, and unimaginable scenarios. This is no average slapped-together horror film; Peele’s writing is tense, sharp, and effective. His characters are fantastic and the performances by his cast elevates them even further. Catherine Keener and Bradley Whitford are stellar, revealing new, creepy layers to their characters with each new scene. Daniel Kaluuya ups the horror hero ante on Chris, deftly balancing his paranoia with his spot-on instinct that there is something wrong with his hosts and their friends; he’s no fool, but he’s going to get all the information before he makes up his mind. Finally, I would be very remiss if I didn’t highlight LilRel Howery (“Get a Job”) as Rod, Chris’ TSA agent friend who is gifted with all of the best lines in the film. He is the jewel of Get Out, the best friend with all the crazy theories who somehow also has a knack for seeing things as they really are.

Peele’s story takes an intense, over-the-top horror scenario and blends it with the ignorance, paranoia, and disbelief many, many face in their real-life everyday experiences. Assumptions are made on all sides and from all characters in various ways in this movie, and it definitely brings to mind such classics as “The Stepford Wives” and “Invasion of the Body Snatchers.” Get Out highlights just how alone someone can be while surrounded by seemingly friendly faces, and showcases a number of truths that continue to call for attention. There’s a reason you’re hearing so much about this film; it lives up to the hype. Make sure you get out and see it. 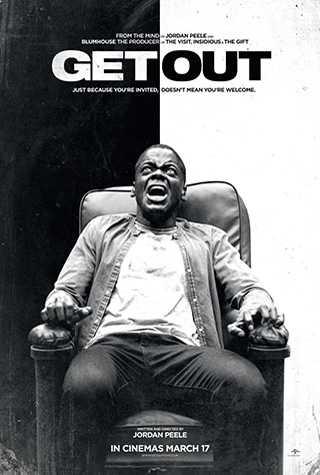