Real heroes do not always end up with glory and parades. Heroism is sometimes reflected in small scale actions that no one ever hears about but occur every day in schools, hospitals or wherever there are people who need compassion. Werner Erhard defines true heroism as “the kind which ends up in the truth, in what works, in what is honest and real being brought out and made available to others.” This kind of authenticity is front and center in Destin Cretton’s Short Term 12, the story of troubled teens living in a short-term group home who are the recipients of empathy from counselors only a few years older who may have faced similar situations in their life.

Winner of the audience award at the L.A. Film Festival and South by Southwest as well as the narrative feature prize, Short Term 12 is funny and sad with a wide range of emotions in-between. Coming from the director’s own experience of working in a similar environment for two years, the film is permeated with an air of authenticity and it is rare that a film has such uniformly natural performances. Grace (Brie Larson, “The Spectacular Now”) is the staff supervisor at the home known only as Short Term 12, a designation reflecting the fact that the residents are supposed to be there for no more than a year, although many have been there longer. The longer they stay, however, the more traumatic it is for them to leave.

These are not “bad” kids though some may have had run-ins with the law. They are, more often than not, victims of parental abuse or neglect whose continuing to live at home would put them at risk. Most of the children are scared and have a lot of hidden anger, but Cretton does not present them in a way that solicits our pity. They are who they are and we relate to them as fellow human beings. As Grace tells Nate (Rami Malek, “Ain’t Them Bodies Saints”), a new worker at the home, “We’re not their parents or their therapists. We’re just here to create a safe environment.” These words seem to be lost on Nate, however, who, when introduced to the residents, says “I’ve always wanted to work with underprivileged kids,” an insulting designation to which 17-year-old Marcus (Lakeith Stanfield) takes umbrage. Marcus, who is going to be discharged when he reaches 18, ready or not, elicits a stumbling apology from Nate who realizes his mistake.

Grace’s boyfriend, Mason (John Gallagher Jr., “Margaret”), begins the film with a story about an embarrassing incident with a young runaway. The story, which is gross and off-putting, is interrupted by bells going off as a scrawny young boy, Sammy (Alex Calloway), a frequent runaway, makes a beeline for the gate but is intercepted before he can make it outside the property. Jayden, in an impeccable performance by Kaitlyn Dever (“Bad Teacher”), is a new arrival who has made previous suicide attempts. Expecting her father to take her home soon, she is surly and uncommunicative and is only able to communicate with Grace by means of a heartbreaking children’s story she wrote about a shark and an octopus, a story with a hidden meaning that that Grace pick ups on.

Marcus, in another moving scene, sings a deeply felt rap song he created for Mason about “a life not knowing what a normal life’s like.” Although the children play a huge role in Short Term 12, the main focus is on Grace and how her work affects her life. We find out at the beginning that she is pregnant and has scheduled an appointment to have an abortion, but she is conflicted. She knows that Mason loves her and would be a good father but she has seen neglectful parents or worse in her own life and at the home and her built-up anger expresses itself in a memorable scene.

Short Term 12 could have become another film that sets out to inspire us through contrivance and manipulation. Under Cretton’s direction, however, if there are tears to be shed, every one of them is earned. Though it (most likely) will not be remembered when awards are handed out at the end of the year, unlike many films with huge budgets and greater hype, it will remain with you after the others are long forgotten. Short Term 12 may just be the best film of the year. 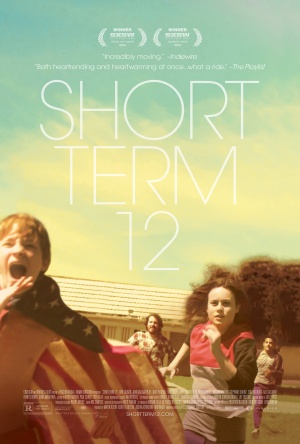