In TV, it’s called a bottle episode. Twenty minutes, (or forty, or sixty . . .) that take place on a single set with a limited cast. Though you might struggle to bring one to mind immediately, it’s quite a common occurrence, happening in shows like “Community” (they take real pride in their bottle episodes), “Friends,” “Breaking Bad,” and “The West Wing.”

In film, it’s called a chamber piece, and they have an even longer history; Alfred Hitchcock used this device in “Rope,” “Lifeboat,” and “Rear Window.” “12 Angry Men” is another classic; more recently there’s been “Buried,” “Carnage” and “Locke.”

7 Years is set over one tense night in the deserted offices of an up-and-coming tech company. Present are the four friends responsible for its running, CEO Marcel (Alex Brendemühl, “The German Doctor”), CFO Vero (Juana Acosta, “Anna”), inventor Luis (Paco León, “We Are Pregnant”) and client liaison Carlos (Juan Pablo Raba, “The 33”). To cut a long story short, some financial misdeeds have been taking place, and in the morning an arrest will be made. The four of them, with the help of professional mediator José (Manuel Morón, “Cell 211”), must decide who is going to spend those seven long years in prison.

The first Spanish-language Netflix original, 7 Years clocks in at a taut seventy-seven minutes. The short running time keeps the pace up and we rapidly learn about the complicated histories of these apparent friends. Through using the most logical, unemotional methods, the four dredge up resentments, jealousies and long buried grudges, taking a battering ram to their previously close relationships. Allegiances switch, power changes hands at a speed sometimes too fast to keep up with. Director Roger Gual and his cast weave a whole tumultuous history around four people sitting at an empty table.

The cast’s MVP is Alex Brendemühl. As in “The German Doctor,” where he played the evil Josef Mengele, he displays a surface veneer of calm, trustworthy professionalism, whilst lurking underneath is something truly insidious. His character in 7 Years may not be close to Josef Mengele in terms of evil, but it’s still a jolt when he starts to reveal his true colors. It’s an intelligent, subtle performance — Brendemühl is proving himself to be a force to be reckoned with.

Where the film falters is at its end point. Which is unfortunate because overall, the ending isn’t actually that bad. It leaves an air of the unknown hanging over the characters that keeps the film alive in your head for a little longer than it would have been otherwise. Yet it doesn’t manage to overcome that element of novelty that threatens all these single-location films, which are always in danger of becoming more about the cleverness of the director surpassing the limitations of the chamber piece than they are about the actual story. This ending, despite its positives, undermines everything that came before, and that’s frustrating.

7 Years doesn’t belong in the pantheon of great chamber pieces, or even among the most memorable recent ones. It doesn’t have the emotional potency of “Buried,” the humor of “Carnage,” or the smarts of “Rope.” You aren’t going to be thinking about it the day after you watch it. However, with the sparsest of materials — just five actors and a smart script — Gual easily keeps your attention for seventy-seven minutes, and that’s impressive. 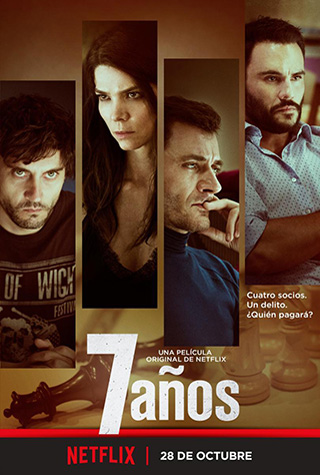