In The Shepherd, we meet Anselmo (Miguel Martín, “Cell 211”) on a day much like any other in his modest, repetitive life. He wakes up in his one-room farmhouse. He feeds his precious dog Pillo, he has breakfast, he showers. He spends the day with his sheep, reading and skimming stones when time permits. He pens the sheep for the night, and then goes for a drink at a quiet bar, having a chat with the amiable bartender. Then he goes to bed, and starts it all over again in the morning. Some might consider this a boring existence, but it’s an existence that Anselmo is perfectly content with.

His quiet life is disrupted by the arrival of two real estate developers, who want to buy his land for a new commercial property; his house would be bulldozed and turned into a squash court. Anselmo, quite happy with his lot, politely refuses their offer. But unbeknownst to him, his neighbors have already agreed to sell their connecting land, and if Anselmo continues to refuse, it means that they won’t get the money they have been relying on. The unassuming shepherd becomes public enemy number one.

The film is directed by Jonathan Cenzual Burley (“The Soul of Flies”), who also serves as writer and cinematographer, and it’s in this last role that he makes his first impression. The early scenes when we watch Anselmo work with his sheep are framed by the most beautiful skies. Cenzual Burley consistently captures the sun at the point just before it disappears beneath the horizon, throwing an otherworldly golden glow over the sheep and the vast open fields. I could have happily watched a whole film that just consisted of Anselmo tending to his sheep amidst the stunningly photographed scenery.

Alas convention dictates that fiction films must contain more than sumptuous shots of a man in a field with sheep, and so Cenzual Burley is charged with the slow ratcheting up of tension. Initially, he does this well. We worry about the vulnerability of this gentle man in his isolated farmhouse, as word spreads of his refusal to sign the profitable deal. Though he has allies, his enemies appear to be both larger in number, and more desperate.

Unfortunately, about half way through there’s a clunky “Chekhov’s gun” situation, it becomes obvious what’s going to happen, and Cenzual Burley doesn’t seem to feel the need to add any surprises (or imply any). There’s not a lot of interest to be had from watching these events play out as it’s plain for all to see that they’re going to. The tension evaporates.

The disappointment of the second half of The Shepherd is allayed in part by the talented cast, who without exception are convincing and compelling. Miguel Martín suggests a world of growing anger brewing behind his weathered cliff of a face. Juan Luis Sara makes Paco a tiny whirlwind of fury, but the really frightening character is Julián (Alfonso Mendiguchía, “The Manhattan Project”), whose polite exterior is a mask that barely covers a terrifying malice.

The Shepherd begins with a bible verse (James 5: 1-6) and in many senses is a modern-day parable. It has a clear beginning, middle and end, it’s simple, and there’s an obvious moral about the dangers of greed. But once that structure begins to assert itself, the film loses any nuance it may have had. You stop wondering how Julián got into so much debt, or why Anselmo has never looked for a life outside his farmhouse. It becomes unimportant, and it undoes the fine work of these actors; they become archetypes rather than real people. And if they aren’t real people, then why should we care about them? 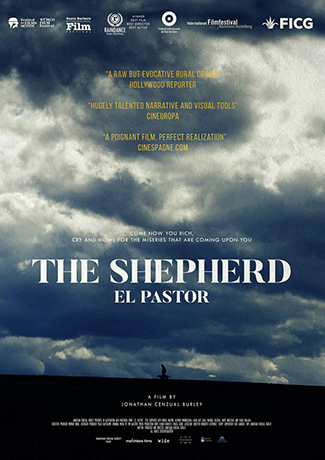