From its opening shots of a city by night to its final image of a teenage boy entering an apartment block, La Granja (English title: “The Farm”) declares its interconnectivity and sociological credentials for all to see. Set in the Barrio La Esperanza area of Puerto Rico, writer-director Angel Manuel Soto’s film presents three narrative threads, loosely connected by the poverty, drug addiction and government crackdown experienced in this community.

With its network narrative that blends crime and social commentary, La Granja echoes other Latin American films like “Amores Perros” and “Cidade de Deus.” Rather than attempting the stylistic ferocity of Alejandro González Iñárritu or Fernando Meirelles and Kátia Lund, Soto opts for a more lyrical approach, often delivering sequences that are hauntingly beautiful while also unflinchingly bleak. An early sequence demonstrates this well, as the first of the film’s three protagonists, teenage boy Lucho (Henry Rivera), spies on his stepsister Sara (Yulianna Padilla) having sex with her boyfriend Bryan (Marcos Carlos Cintrón). This sequence resonates with Alfonso Cuarón’s “Y Tu Mamá También,” and like that film, the scene is sexually explicit without being exploitative. However, Soto quickly lays out his own territory as Sara demands drugs, and although Lucho looks away, the film does not do likewise, presenting in disquieting detail the image of Bryan injecting Sara with heroin.

Heroin and interdependency run throughout the film, providing dramatic connective tissue as well as thematic fodder. Bryan’s dealer is Nesto (Eddie Díaz), whose supplier Rubén (John Gracía), uses Lucho as a courier to transport heroin to Barrio La Esperanza. Rubén also has an ongoing relationship with Ingrid (Amneris Morales, “Stray Bullet”), a midwife who lives in the same apartment building as Lucho and Sara, and who treats various mothers who enter labor while addicted to heroin. The janitor at the hospital where Ingrid works is Fausto (César Galindez), a chain-smoking former boxer and cock-fighter, who owes a lot of money to Rubén. In order to pay off this debt Fausto has his teenage son Santito (José Colón) fight in boxing matches against other children, and effectively work as hired muscle for Rubén, the Faustian nature of this bargain underlined by the janitor’s name. Rubén appears in the film’s three chapters — “La Gallina” (chicken) that focuses on Ingrid, “El Gallo” (rooster) that focuses on Fausto, and “La Mula” (mule) that focuses on Lucho. The background figure of Rubén nevertheless looms large over his “farm” where the three central characters fulfill their animal roles. Rubén echoes other cinematic crime lords, most obviously Don Vito Corleone in “The Godfather” (1972) but also Montoya in “Miami Vice” (2006).

However, despite its cinematic lineage, La Granja never feels derivative or anything less than its own beast. Cruelty and violence in this film are banal, Lucho’s downtrodden lack of resistance expressive of the seeming inevitability. The presence of drug dealers makes it unsurprising (to anyone familiar with “Scarface,” “Traffic” or “Sicario”) when people are casually murdered, but the inclusion of children being brutalized, complete with their pleas for help, makes for deeply uncomfortable viewing. Scenes in the hospital where Ingrid and Fausto work veer from grim to touching to out-and-out shocking, sometimes captured in long takes that are even harder to watch. A constant mediascape runs throughout the film, with news channels reporting on the police operation against the drug trade, a forthcoming election and connections between politicians and criminals. When Lucho transports Rubén’s drugs, he passes police check-points where cars and people are searched, but the heroin is well hidden.

Crucially, all of these grim scenarios are understandable, even if far removed from the world of the viewer. Ingrid is unable to bear children of her own, therefore feels aggrieved that women who abuse themselves with heroin are able to conceive. While one may not agree with her judgment of the addicted women, her own frustration and loneliness are recognizable. In one sequence, alone in her apartment Ingrid masturbates, in a shot that captures her through a doorway. The intrusion of the surrounding wall and door into the camera frame emphasizes her isolation and lack of human contact — significantly, we barely see her and Rubén together, despite their association. Similarly, Fausto clearly understands that he is dealing with a ruthless crime boss who thinks nothing of murdering those who fail to pay him, but his relationship with Santito is convincing because he does not coerce or bully his son in any way. The boy wants to box, wants to be the best fighter he can, and acquits himself well in a training montage of sparring, running and other exercises, while Rubén and the crowd at the boxing matches cheer for him. Therefore, the arrangement between Santito, Fausto and Rubén is understandable and sympathetic. In the case of Lucho, exactly why he ferries drugs for Rubén past the check-points is not explicated, but it is never suggested that he has a choice — he simply does what is expected of him.

The unflinching bleakness of La Granja might become wearing were it not for Soto’s engaging filmmaking. The cinematography by Sonnel Velazquez varies from handheld shots that follow characters through the interior spaces to wide angled long shots for the exteriors, often capturing much of the poverty-stricken area. Fausto sometimes goes to the top of the hospital to look over the city, a partially constructed building appearing as little more than a steel and concrete skeleton. A horse tied to a tree recurs throughout the film, visited regularly by Lucho and also passed by Santito as he trains, working as a potent symbol for the people similarly trapped on this “farm.”

Soto and co-editor Gabriel Coss’ masterstroke, however, is non-chronological storytelling. Events are often replayed from different perspectives, such as cars seen travelling from the street and then from inside another vehicle. The cyclical appearance and reappearance of events adds to the sense of hopelessness, but significantly the film’s finale manages to find a sense of hope in the midst of all this grimness. It is only a little hope, consisting of a minor resistance within this highly oppressive environment, but it is telling that La Granja manages to strike just the right balance to leave the viewer feeling that they have seen much that is wretched, but enough to believe that an alternative could exist. 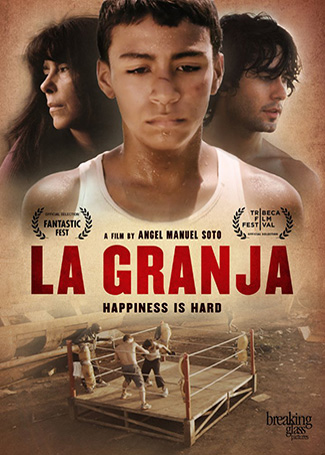