It’s an uncomfortably heavy 13-minute stretch that Konrad Tho Fiedler fills in Running Eagle to tell the brief, though highly evocative tale of a young Native American woman (Devery Jacobs, “Rhymes for Young Ghouls”) struggling to get back home across a frozen wasteland after fleeing a life of forced prostitution. The narrative is split between the current challenges of her journey home and the memories of her participation in a ritual that asked her to shoot a buffalo in the icy tundra. This is a rough, harrowing tale and its dramatic weight could use more space to cover for maximum effect, but it’s still an impressive piece of tightly focused filmmaking.

Fiedler fills the air with a lot of silence, using dialogue quite sparingly, and he proves to be quite adept at establishing tone and mood. This is especially important given how stingy he is with narrative details. We know almost nothing of the protagonist (not even her name), unaware of how she got from one visible point on her timeline to another, and we don’t even have much understanding of what home she is trying to reach in her trek back.

This all adds to the mystery and allows us to fill in the blanks, but mainly it informs us that Fiedler is more interested in making us feel than letting us know. Given the short running time of Running Eagle and the need to make an impression, it’s a fair decision to focus on putting us in the protagonist’s shoes and letting us feel her pain and fear instead of simply laying out a bunch of facts to create a distinct trail of narrative breadcrumbs.

At the same time, it’s tough to communicate so much hurt and sadness in just a few minutes and the picture isn’t quite as moving as it could be with a longer stretch spent within its borders. Fiedler developed his story by adapting the prologue of Gwen Florio’s novel Dakota, which Fiedler apparently plans to adapt in full as a future feature project. In that sense, this short may one day prove to be a compelling companion piece to the extended film.

As it is now, on its own, Running Eagle is still a cold, captivating work wrapped around a particularly strong performance by Jacobs, who must communicate the emotional complexities of both her past and present almost entirely through her eyes. It’s a great piece of acting that again makes me yearn for a longer look at her character’s experiences, so intriguing is her screen presence.

The small pieces of information that are there for the gleaning certainly entice. Everyone appears to want something from the protagonist, which means she risks being defined more by others than she is by herself. But she’s clearly the focus and Jacobs is so interesting that we see a steeliness shine through and give her tale some glimmer of hope. The title Running Eagle is the name of an actual Native American warrior from the same Blackfeet tribe it would appear our protagonist is trying to return to. One can reasonably assume this suggests she has the spirit of a warrior, but the reference is still shrouded in memorable mystery.

With only 13 minutes, Fiedler establishes himself as a promising storyteller with a calm and steady hand and he shows how much Jacobs can bring to a role with just a handful of mostly dialogue-free scenes, so their collaboration suggests exciting things lie ahead. This short is very good, but it’s more of a taste that leaves one wanting more or a thought not fully formed. Based on what he accomplishes here, Fiedler should be more than capable of widening his scope with emotionally raw results. 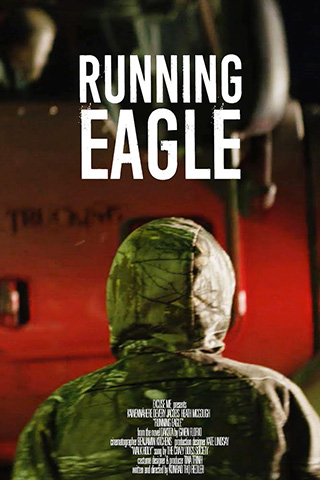