After viewing Uncut Gems, I found myself wondering, “Has any movie character ever so completely brought all their story’s conflict upon themselves as much as Howard Ratner does?” I guess that’s the nature of stories about addiction, that the addicts can’t help themselves and suffer horrible consequences as a result, but Howard really takes the cake when it comes to going out of his way to make every single situation worse. It’s like he’s lobbing grenades into every corner of his life with every step he takes. He owes everyone tons of money because he can’t stop placing bets and his solution every single time is to place another bet to get more money so that he can place another bet to get more money.

It’s kind of infuriating to watch and that feeling is only exacerbated by the casting of Adam Sandler (“The Meyerowitz Stories”) as the New York jeweler at the heart of the story, who is just such an irritating, unlikable presence to begin with. I can’t really tell if this is good casting or stunt casting, but it certainly made me like Sandler even less than I did before, which is really saying something. And we’re clearly meant to despise his character, to be disgusted by him and to anticipate his overdue downfall, so in that sense, writing and directing brothers Benny and Josh Safdie accomplish their goal.

But I’m not sure how highly I’d value the worth of that goal, though. They’ve opted to combine a character study and a ticking-clock thriller with Uncut Gems, which is intriguing, except the fate of the character provides extremely low dramatic stakes and the thriller elements are entirely a product of terrible decisions being made again and again, as Howard repeatedly proves himself incapable of fixing any mistakes or not fucking up each and every situation. The Safdies have a kinetic style that keeps everything moving at an entertaining pace, but while their film “Good Time” gave its protagonist a tough task that got progressively worse due to a combination of personal mistakes and external problems, Howard brings everything upon himself.

In many ways, this whole depiction of Howard as someone so despicable and hopeless seems to exist so that the Safdies can justify an unexpected ending without completely losing the audience. And what they deliver certainly is a shocker and an incredibly well executed sequence, plus it serves as a fitting way to close out Howard’s arc, who is always chasing the big win without any appreciation for the dangers that lurk around the corner. He’s willing to gamble it all on his latest bet, thinking that all will be forgiven if he hits it big, unaware that the thugs — loan shark brother-in-law Arno (Eric Bogosian, “Rebel in the Rye”) and his bodyguards Phil and Nicol (Keith Williams Richards and Tommy Kominik) — are the kind of guys that you can only mess with so many times.

So the ending successfully underscores Howard’s movie-long plight and avoids the blander alternatives of him either losing the bet and being in deeper trouble than before or winning the bet and just paying off his debts, but I still can’t shake the urge to kind of shrug the whole thing off. It feels like an exercise in futility to tell a 135-minute story about a total asshole that repeatedly dodges his comeuppance time and again. Even the insights into gambling addiction seem skewed by the fact that Howard is such a uniquely awful person — routinely cheating his kinda-business partner (LaKeith Stanfield, “Sorry to Bother You”) and customers, and on his wife (Idina Menzel, “Frozen II”) with his much younger mistress (Julia Fox, “Puppet”) — and not a half-decent person turned bad by their addiction and idiocy.

There’s certainly something to be said about the Safdie Bros. making their biggest movie yet and using the whole thing to exploit the most irritating tendencies of a superstar, but that still leaves me thinking that Uncut Gems is ultimately an empty, cruel, and soulless endeavor, more of a dark joke than anything else. 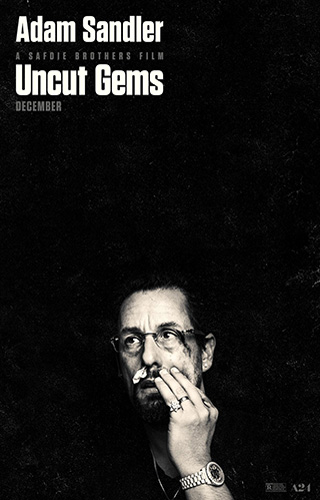