If you’ve kept up with any of the reports on methods of achieving inner peace, tranquility, reducing anxiety, relieving trauma, or modifying destructive behavior, it’s likely you’ve heard somewhere of the mindfulness method. Jon Kabat-Zinn was the first researcher to make the concept of mindfulness popular in the United States after penning several books based on his experience of conducting the Stress Reduction Clinic at the University of Massachusetts Medical Center. Unfortunately, he makes only a very brief appearance in Robert Beemer’s 101-minute documentary, The Mindfulness Movement.

While it’s true that film has the ability of bringing personal anecdote to life through on-camera interviews that would most likely prove dull in a non-fiction book, The Mindfulness Movement is practically all anecdote. It’s affirming to hear about the success of a number of semi well-known people and not so well known people in finding a practice that helped their specific troubles and symptoms, like panic disorders, chronic feelings of alienation, meaninglessness, or out-of-control anger—often the result of post-traumatic stress disorder. However, the problem with The Mindfulness Movement is that it is structured nearly entirely as a series of vignettes with one person after another relating the benefits they’ve obtained from their practice. The presentation of a hodge-podge of interviews and mindfulness workshops don’t provide much indication of a national or international movement.

Among those interviewed are Jewel Kilcher, singer/songwriter; Dan Harris, broadcast news presenter; and George Mumford, a former NBA hopeful, who now teaches mindfulness to the players on a couple of NBA teams. Certainly, there is value in placing the spotlight on these and other people, who overcame personal difficulty by embarking on voyages toward mindfulness and away from destructive habits like drug abuse, or who found mindfulness practice as a way to find the mental space to overcome unhappy lives of homelessness by building lifestyles that reflect balance and self-sufficiency. The problem is that there’s no depiction of the journey. Their stories are told as facilely as a before and after advertisement for a weight loss program.

There are also vignettes that depict the use of mindfulness in helping prisoners, police officers, disease sufferers, and others that find themselves in high stress environments or circumstances. Once again, the film only examines these mindfulness workshops superficially. If the practice can have such a profound effect, it surely is worth more than a series of cinematic sound bites. Additionally, if you are using the medium of film to communicate, it would be logical to exploit some of its unique properties. Aiming your camera at a group of people in meditative-like postures isn’t the most creative use of its potential.

Perhaps the greatest weakness of The Mindfulness Movement is that the final 30-minutes or so transitioned from superficiality to confusion. We’re introduced to several organizations that operate mindfulness programs, but we’re also privy to workshops that seem closer to meditation than mindfulness. And as I stated before, there is a significant difference, but it is given short shrift in the documentary. The subject matter seems to go even farther afield when we’re presented with a workshop where participants use technology that purports to provide neurobiofeedback that can be accomplished on one’s own rather than has been the more standard treatment of a trained practitioner with some rather sophisticated equipment.

Neurobiofeedback is quite a different method than the standard mindfulness practice. Why it was included in the documentary is a mystery to me unless it was a convenient way to allow the film to achieve feature length status (a convenient way to rationalize offering viewers the opportunity to purchase a DVD of the film suitable for their local organizations and institutions). Unfortunately, quantity doesn’t equal quality. And repetition of the message that mindfulness is a safe, rewarding way to find inner peace isn’t likely to help embed the idea into the viewer’s mind. It’s more likely to cause her or him to numb out after an hour or so. 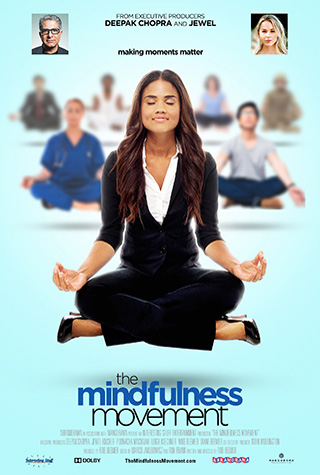