Although it supports a cast full of people you’ve probably heard of, Badland has the look and feel of a basic-cable Western. The acting is generally dispassionate, even dull, and the writing is third rate, to say the least. If you’re looking for an exciting action movie, you might be better off finding a test pattern to stare at. Or watch two raindrops race to the bottom of a window pane. You get the idea.

All kidding aside (or is it?), here’s the basic plot. A detective, Mathias Breecher (Kevin Makely, “Any Bullet Will Do”), with the Pinkerton agency (the precursor to the Secret Service) is assigned the task of tracking down war criminals from the American Civil War and stringing them up for their crimes. He’s been given this job by the first black senator in the land (Tony Todd, “Final Destination 5”). From there Badland is then split into several chapters, each detailing Breecher’s efforts to bring these baddies to justice, including a former general, a repenting former army captain, and a corrupt sheriff.

Kind of does sound like a premise for a low-budget TV series, doesn’t it?

Breecher’s first target is a General Dandridge (Trace Adkins, whom I’m told is a fine country singer). He’s plays the general a little broadly, even while speaking with a soft rumble, possibly in an effort to seem more nuanced and devious. It doesn’t quite work, but moreover the entire scene is over very quickly, and Breecher can move on to the next chapter. Chapter two involves a Captain Cooke (Bruce Dern, “The Hateful Eight”) who, it turns out, is bedridden and quite ill. He’s being tended to by his only daughter Sarah (Mira Sorvino, “Waterlily Jaguar”). Breecher is there to do his duty, but the old captain is on his last legs. Or would be, if he weren’t laying in bed all the time. Meanwhile, a band of ne’er-do-wells working for an evil landowner (James Russo, “Django Unchained”) harass Sarah in an effort to — wait for it — steal her land. Yes, it’s one of the oldest tropes known to modern man. Finally, Breecher visits a town that’s run by the tyrannical Huxley Wainwright (Jeff Fahey, “American Dresser”), the kind of guy who has like ten deputies even though the town itself is pretty tiny.

On their own, none of these three episodes is all that strong, and together they form a mountain of dullness. There are some bright spots, such as the work turned in by old pros Dern and Fahey. Russo and Sorvino aren’t given much to do, while conversely Makely is given way too much to do. I’ve seen tackling dummies with more charisma. And it wasn’t just him; far too often, an actor would deliver a line with a weird pause randomly tossed in, and it happened so frequently that I got the impression that they had been coached to do so, possibly by the director (Justin Lee, “Swell”). These line readings sounded as if they were being delivered by aliens who were trying desperately to pass as humans. The inflection and tones were all wrong. But it’s not as if the words they were given to recite were fraught with meaning, either; a typical picture book has a more vibrant vocabulary than this script.

Luckily for all, Badland is avoidable. Just don’t watch it. If you’re lucky, someday you might see a clip of Dern or Fahey’s scenes, and you’ll appreciate them all the more. But do try to limit yourself to those two performances, because the rest of the movie (and cast) is dreadfully unappealing. 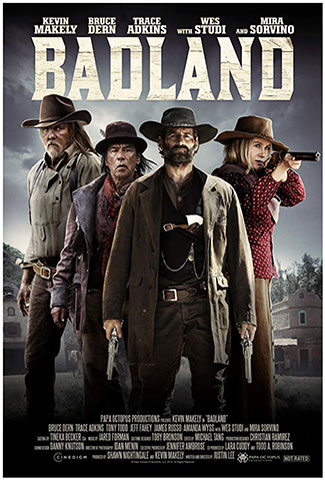