Times are tough. These times I mean. Or rather, Tim Blake Nelson does, or seems to do in his Anesthesia. These are times of self-absorbing, self-imbibing, self-obsessed selfishness from which we’re constantly trying to tell ourselves apart — unwittingly remitting ourselves to the badlands of choice wherein our decisions continue to be ruled by self-interest . . . unwittingly becoming yet another walking sample of what the lack of true interaction does and has done to our kind: Yet another solitary specimen parted from another latitude, the latitude of solitude, alienated and bereft of lines, except for those that we walk to keep our cravings on our side.

The movie opens with a sequence shot that starts with a big close up of an old man’s face that quickly turns into a medium shot of his back as he walks onto an urban corner to which the camera doesn’t dare to follow. It watches him detached, remotely buying flowers and speaking to other people in barely audible voices — fellow residents of the street at night. Remotely buying flowers before the movie truly starts — before this old man gets stubbornly stabbed . . . right at the heart of Manhattan.

Then the prologue comes to an end and the film finally starts, opening with him, again, in a flashback lecturing about philosophy and Darwin and humanity and nature and how all these coincide inside the classroom of a most respected university while students stultify themselves with respect for this old man. This flashback suggests us the story of a fall and, being the kind of humans that Anesthesia criticizes, severely self-centered, this is enough to pique our interest. Later on, as the several stories that compose this film start to unfold (and the characters populating its landscape equally unfurl), we start to feel more piqued than interested.

Anesthesia is the kind of mosaic movie that Robert Altman transformed into an art of its own and with which he crowned his extraordinary style. The almost retired professor (Sam Waterston, “Law & Order: Special Victims Unit” TV series), who we catch in his week day in the job . . . and more literally perhaps in his last week in life, is the gravitational force around which all the other stories, all the other characters, rotate and translate: The sun at the end of dawn. Almost done we meet his son (Tim Blake Nelson, “Fantastic Four”) talking to him, revealing to him how he fears his wife (Jessica Hecht, “J. Edgar”) might have cancer . . . and how she wants to keep it a secret. And then, as a ripple effect (but as though we could see the ripples independently from the pebble — or the water), other characters join in: A brilliant writer but, alas, a heroin addict (K. Todd Freeman, “Teenage Mutant Ninja Turtles”) whose guilt-ridden, but too busy and sexy for his own good, friend (Michael K. Williams, “Time Out of Mind”) sets to rehabilitate; another bright but addicted, if to other stuff, philosophy student (Kristen Stewart, “Clouds of Sils Maria”) trying to quit her scarring (and scary) tendencies; yet another brainy but harmless stoner teenager (Ben Konigsberg, “Quitters”) and his socially smarter yet equally teenaged sister (Hannah Marks, “The Runaways”), incidentally the professor’s grandchildren, trying to cope with their mother’s potential illness; a cheating husband (Corey Stoll, “Ant-Man”) spending his mock-business-trip to China with his lover (Mickey Sumner, “Frances Ha”) in Manhattan; the cheated wife (Gretchen Mol, “3:10 to Yuma”) spending her days drinking out her humdrum in the suburban outskirts of New York . . . when, in all truth, all this just retired professor wants is to get to his wife (Glenn Close, “Albert Nobbs”) and hand her the bouquet of flowers he has handed her every Friday night for over 30 years.

And then, in-between, the movie drifts. All these characters intersect in the life of the professor, directly or indirectly, but, as other than the professor, they all live unsatisfactory lives — and they’re all doing their best to numb them. From the bright but painfully secluded student, who appears to us as nothing but a “selfish lonely bitch” to the cancer-threatened wife and the fearful and ultimately useless husband, from the ravaging writer needing the needle much more than the pen to the well-educated, well-to-do stay-in-home wife sinking her boredom in a variety of bottles and grinded glasses, from the cheating husband neglecting his family while creating an oasis right in the middle of the Great Apple to the ex-heroin addict now prominent lawyer living off his overwhelming yet hollow personality, all characters are driven by their own egotistical reasons and they all drive great lengths to numb their egos down — only the young ones, the two teenagers, seem capable of enjoying themselves, but then we find out they are nothing but trainees in the art of narcissistic guilt.

There is an important difference between them though. While all adults are caught in the fear of the “what if,” and where young adults find themselves amidst the angst of the “what,” only the very young, adolescents and kids, are able to seize the “what” and the “what if” as sheer possibilities to unhinge — if irresponsibly. It is as though the only responsibility these characters were capable of was framed by guilt, and as though the only joy worth witnessing was completely responsibility free. And the professor is in the middle, right on its way off a most satisfactory life.

More importantly, and this concerns adults and seniors, young adults and young kids, everybody seems to presume to know what others need and act accordingly. In the end what we see as all connections converge in the wrinkled face of the exemplary man, is that this strange form of narcissism translates as well in a dislocated form of kindness, the kind that only seems to serve the server, to further inflate their ego by constantly proving their self right while moving their own anxieties to the ones they identify in their neighbors (a figure of speech of course, for no neighbors appear in this film). They are all diseased, as George Carlin would have it, with this strange disorder called the social worker syndrome.

At its best, thus, Anesthesia works as an intergenerational tale about choice and possibility — though more precisely about the restriction of choice due to the fear of possibility. Although everyone acts in utter self-interest, out of sheer selfishness, they all dread the void that opens every time in which possibility offers itself and they are forced to decide. As said before, only the very young ones are able to seize what opens through this void as a promising horizon filled with even more promising outcomes; their expectations are constantly impregnated by their ingenuity, by their lack of experience in life. For those who are experienced are astronomically afraid of any open sky, and are constantly trenching themselves within the rooftop of their doubts.

Decisions, in this way, are steadily placed at the point in which they intersect with the choices of others, where they hence have consequences. This is Blake Nelson’s take at “intersectionality,” which is the latest philosophical fad to point at the destabilization of being and identity and the self. In a nutshell, where modern reason looks at the ocean and sees the sea, a unified body of water, the intersectional mind looks at this same body and sees the intersection of millions of years condensed in billions of drops of rain and gas and mud and salt and weed and fish shit, and calls it, for its convenience, the sea, while knowing this word is made out of the intersection of a great amount of elements that can be listed and, more importantly, of many more that cannot.

So, in terms of decisions and consequences, we go from the factuality of broken promises (what could have been had this man not toyed with heroin for the first time or had this woman continued cultivating her intellect, etc.) to the latency of pure potential (i.e., may the children receive the best possible education or the teenagers expand their minds and explore their bodies) to just one fulfilled promise, the professor’s.

And this is the greatest obstacle to Anesthesia. The professor’s character stands in its aloofness too tall to relate with the characters constantly intersecting with him — everything he does looks like charity, but one without agape, although without self-interest proper, something drier, almost born out of an academic sense of duty. While all the people around him is too preoccupied in finding, in developing ways to numb the possibilities lingering around them, in manufacturing modes to avoid the void opening in front of them, opening as they live their lives, being life unframed by the possibility that defines it, doing their best to feel safe and saving themselves to death, the professor seems to be lecturing them all with the example of his life — and being too conscious at that.

Anesthesia is, in this sense, though highly intelligent, too talkative, too preachy to even partake in the same conversation with their worthier predecessors, such as Altman’s frescoes, masterpieces like “Short Cuts,” or Paul Thomas Anderson’s murals, memorable pieces like “Magnolia,” or even Alejandro González Iñárritu’s triptychs in the times of Guillermo Arriaga, being “Amores Perros” likely the best of the three in which these two teamed. An important difference between Blake Nelson’s work and these others is that where irony sifted through by letting chance take the central role around the characters, Anesthesia attempts to sedate the power of randomness with the conscious efforts of its central character — and thus having a central character becomes much more a hindrance than a threshold. The stubborn affirmation of meaning made by the professor, and, what is worse, of meaning as purpose right at the midst of overwhelming alienation, is purportedly reversed at the end of the film, when the “at least he’s not in any pain” is uttered and echoed throughout characters who have been wanting to elude it by circumventing possibility and by rather restricting their life to choice and their choices to the ones appearing most at hand, as though they couldn’t go beyond the realms of their own actions — an impossible feat.

Talkativeness, however, seems a contagious bug, as this review has grown slightly lengthier than most I’ve written to date — the temptation to lecture is always too luring for those who’ve been preaching onto empty seats . . . a room full of possible readers. 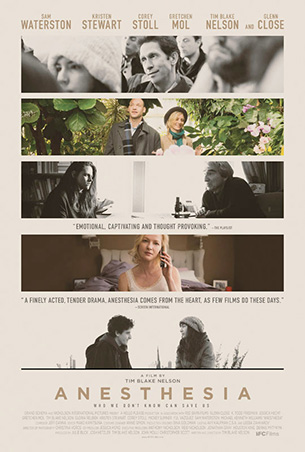