There’s no place like home . . . unless you’re someone who tries to deny your own when you need it the most. That’s the conundrum in which we find George Hammond, an aging nomadic man, who’s seemingly unaware of his own bleak reality as he tries to survive in the cold and vast streets of New York City. With statistics showing the homeless population in the United States soaring past 600,000 people, one filmmaking team decided to tackle this tragic social issue head on. But in order for the film’s impact to not go in vain, the filmmakers summon one of Hollywood’s long-time leading men — Richard Gere (“The Second Best Exotic Marigold Hotel”) — to take charge. Gere, who not only serves as the film’s producer also tries to embody himself as disgruntled protagonist George Hammond.

In actuality, Gere himself has been an advocate for helping the homeless; supporting various shelters and people in the past. The film’s story is inspired by Gere’s personal experiences with the people he’s met over the years and it’s written with such minimalist passion by Jeffrey Caine and the film’s director, Oren Moverman, who earned a Best Original Screenplay nomination for “The Messenger” in 2010 (he also wrote and directed “Rampart” starring Woody Harrelson in 2011). The award-winning pedigree from this team isn’t what made me interested in seeing this movie. It was the story’s understated, character-driven model that lured me in . . . and an underwhelming piece of storytelling is what I got.

It all starts with the man in the story’s center. Time Out of Mind is essentially a character study, but Gere’s portrayal as George quickly becomes a broken record; a seemingly sympathetic man who essentially says three things: “I’m hungry, I’m tried, and I’m confused.” With that noted, it only leaves the audience in a situation where they find themselves thinking, “I’m bored.” I have no problem giving the filmmakers kudos for creating an unlikable person who seems to get annoyed whenever people are just trying to help him or make friendly conversation. But it is a problem when that lead character is consistently outshined by minor and supporting characters like the highly energetic Ben Vereen (“Funny Lady”) who plays Dixon, a self-proclaimed jazz prodigy turned homeless man who earnestly befriends George.

When dealing with a difficult main character like George, the goal of the tale aims to show depth within his humanity. However, it seems the only way that the audience can peer into this broken soul was through countless scenes of Gere’s reflection in various windows. It’s as if we were not meant to get that close to him because the reflections symbolize his entrapment in a hopeless misfortune. This intended artful imagery doesn’t make the story any more complex than it actually is. Its episodic structure brings the nearly non-existent plot out in a straightforward fashion. There are a few scenes that display some interesting conflict, but those moments are unfortunately overshadowed by the mundane and the redundantly obvious: George’s homelessness, isolation, hunger, bewilderment, agitation, and defiance toward wanting help when promising opportunities are shown to him in order to get his life back on track.

Ultimately, you have a tale that’s filled with day-to-day fluff and misses out on a big opportunity. It’s too little too late when the film tries to explore the true heart of its story — the turbulent relationship George has with his estranged daughter Maggie, who’s played by Jena Malone (“Inherent Vice” and “The Hunger Games: Mockingjay – Part 1”). With a climax that intends to be fiery with familial tension, the end result is a series of daddy-daughter scenes occupied with hollow subtlety and a feeble grasp at your heartstrings. I suspect the filmmakers will campaign Gere for Best Actor with hopes that he can become this Oscar season’s comeback kid like Michael Keaton in last year’s “Birdman.” Although, Keaton was able to get his nomination, I doubt Gere will. Despite Gere’s decent effort, Time Out of Mind is a somber film about a troubled old man you’ll forget about shortly after you see it. 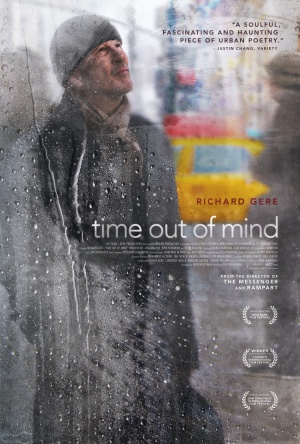